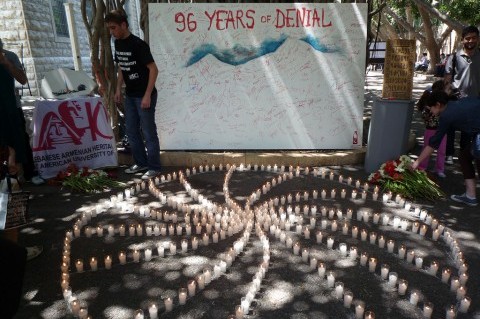 William Saroyan, an Armenian-American writer, wrote in his short story “The Armenian and the Armenian,” “I should like to see any power of the world destroy this race, this small tribe of unimportant people whose wars have all been fought and lost, whose structures have crumbled, literature is unread, music is unheard, and prayers are not more answered. Go ahead, destroy Armenia. See if you can do it.”

The timeline of the 20th century bears the scars of some of the ugliest and most brutal events in human history. World War I, the “war to end all wars,” proved anything but, as brilliant minds devised brilliant means of murder and discrimination-fueled crimes against humanity were committed indiscriminately, beginning with the Armenian genocide.

On April 24, 1915, hundreds of Armenian intellectuals were arrested and killed in Istanbul by Ottoman officials, marking the beginning of the first genocide of the 20th century. An estimated 1.5 million Armenians were killed by the Ottomans, if not straight away, then during mass deportations.

Hostility toward Armenians began to mount increasingly toward the end of the Ottoman Empire. In the late 19th century, Sultan Abdul Hamid II grew increasingly wary of Armenians’ demands for civil rights and instituted pogroms to quell their protests. In 1908, a group called Young Turks overthrew Hamid and re-instituted a constitution, instilling hope in the Armenians for reform.

However, the Young Turks had a vision to “Turkify” the empire. In 1914, they sided with Germany and the Austro-Hungarian Empire during World War I. Perceiving Armenians as a threat to the empire, the Young Turks were already skeptical of them. These suspicions were confirmed after Russian forces with Armenian soldiers defeated the Young Turks during a confrontation in the Caucasus.

After the murders of Armenian intellectuals, the Ottomans next targeted Armenian men who were rounded up and forced to join the Ottoman army. Soon after, their arms were seized and those who had not already died from brutal labor were slaughtered.

Without any Armenian intellectuals and leaders to plant seeds of revolt in the minds of Armenians, and without the men to try and fight back, they were left weak and helpless. Accordingly, the Ottomans then turned to their last target: women and children. Women and girls were raped, beaten and some were forced into slavery to work in harems. Armenian children were kidnapped, forced into converting to Islam, and then given to Turkish families with new, Turkish names.

In an article from The Independent, Robert Frisk describes the methods Turks undertook to “Islamize” Christian Armenian children, writing that, “some of the small, starving inmates stayed alive only by grinding up and eating the bones of other children who had died.”

The largest number of deaths resulted from the mass deportations of Armenians out of Western Armenia (Eastern Anatolia). Ottoman officials ordered Armenians out of their homes under the guise that they were being resettled in non-military zones for their safety. In reality, they were sent on death marches across the Syrian Desert to concentration camps. Once food supplies finished, the Ottomans refused to provide more. They were not permitted to stop for a rest, and those too weak to continue were shot on the spot. Ottoman officials oftentimes forced Armenians into caravans to strip, then walk naked under the blistering sun, thereby hastening their deaths.

About 75 percent of Armenians on these marches died, and countless unburied bodies scattered the Syrian Desert. In fact, there were so many bodies that even today, in the Syrian town Deir ez Zor, the bones of Armenians can still be found by merely scratching at the surface of the desert sands.

The Armenians were also gassed. Crude gas chambers were created by herding them into caves and asphyxiating them by lighting bonfires at the entrances. Other atrocities that took place include burning Armenians alive, crucifying them, drowning them and throwing them off cliffs.

Every year, on April 24, the Armenian Diaspora and Armenians living in Armenia commemorate the genocide. They gather together and rally for international recognition of the events as a genocide because, shamefully, some countries have yet to identify the massacres as genocide, despite overwhelming evidence.

Since the fall of the Ottoman Empire, the Turkish government has denied these events as genocide, attributing the deaths to byproduct casualties of WWI. They argue that genocide involves the systemic and premeditated massacre of a group of people and that the deaths of Armenians during the early 1900s were not premeditated but a consequence of war. However, more and more Turkish historians and scholars are beginning to accept the reality of the events of 1915.

Though American leaders have used the word “genocide” in speeches, the United States has yet to officially pass a bill recognizing the massacres as genocide. However, earlier this month, the Senate Foreign Relations Committee passed a resolution that called to classify the events in 1915 as genocide. The resolution currently awaits a 100-member floor vote.

With nearly 100 years passed since the genocide, some ask why it matters if the genocide is recognized, and why we can’t just move on. We learn about history in order to not repeat the mistakes of the past. But what happens when a people are denied their past? When our history is denied from us, how can we move forward? How can we learn? How can we make sure these horrendous crimes never happen again?

Adolf Hitler understood the importance of wide recognition of the past when he asked, in a speech impending the invasion of Poland, “Who, after all, speaks today of the annihilation of the Armenians?” The crimes of our past serve as warnings for our future. Well, just about a century later, we are speaking today of the genocide of Armenians. No matter how hard one tries to edit history or censor truth, the ghosts of our past will haunt us until they are resolved. The current population of the Armenian Diaspora is estimated to be around 10 million people, forming Armenian communities all around the world.