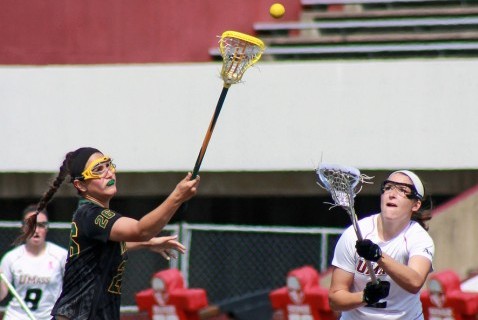 Heading into its final weekend of the regular season, the No. 11 Massachusetts women’s lacrosse team will put their undefeated Atlantic 10 record on the line twice in preparation for the conference playoffs.

Coming off of a 9-8 comeback win on the road against Richmond in its toughest A-10 test to date, the Minutewomen (14-1, 5-0 A-10) will return home to face winless St. Bonaventure on Friday before heading to Pittsburgh, Pa. on Sunday to take on second-place Duquesne.

In addition to owning the worst record within the conference, the Bonnies rank last per game in goals, shots, turnovers, draw control wins and goals allowed. However, senior attacker Sam Rush said that UMass cannot afford to overlook St. Bonaventure (0-12, 0-5).

“Regardless of how many wins a team has, we have two big games this weekend and we want a clean sweep,” Rush said. “Starting Friday, we need to make sure we are executing our game plan.”

Rush said that the intensity in Saturday’s game against the Spiders showed that this “one-game at a time” attitude is needed to maintain focus for the rest of the season.

“We’ve been playing well so far, but our game over the weekend proved that it’s not always going to be easy and that we have to be at the top of our game at all times,” Rush said.

Senior defender Kelsey McGovern added that Saturday’s game proved that the Minutewomen have the ability to win in close games. This was something that UMass did not need to worry about before this past weekend, as the team’s first four conference games were won by an average of nearly 15 goals.

“I think that a big takeaway was that we, as a team, have the ability to grind through and pull out a win coming back from a deficit,” McGovern said.

Looking ahead to Friday’s game, UMass coach Angela McMahon said that the matchup can be used to focus on improving on “all the little things,” such as draw controls and shooting efficiency.

In particular, improvement in the draw control battle was something that McMahon stressed prior to the game against Richmond.
The Minutewomen finished Saturday’s matchup with a 13-7 advantage in faceoffs, including a 9-3 edge in the second half. This spark was led by freshman Hannah Murphy, who finished with a team-leading seven draws for the day.

“(Murphy) really kind of put the team on her back in that aspect of play,” McGovern said. “She definitely did not play like a freshman.”

McMahon said that it will be important for Murphy, as well as McGovern, to continue their success on face-offs against the Bonnies.

“When you have success on (the draw), it helps build confidence,” McMahon said. “Having success on the draw on Friday is only going to help us moving forward in being able to do well on it.”

On Sunday, UMass will face a Dukes team that sits one game behind the Minutewomen in the A-10 standings.

Unlike the struggling offense of St. Bonaventure, Duquesne (13-2, 4-1) currently sits atop the conference rankings in scoring, averaging nearly one goal more than UMass.

“We can only go one game at a time,” McMahon said. “We just need to focus on the little things that we have to improve on.”

Friday will be the Minutewomen’s final home game of the regular season. It will also mark the last time that UMass’s eight seniors will play at McGuirk Stadium.

Although Senior Day took place last Sunday, Kelsey McGovern said that this upcoming game also has a significant meaning to her.

“It’s going to be a sentimental game,” McGovern said. “We have such a home field advantage here and it’s a special place where I love playing.”