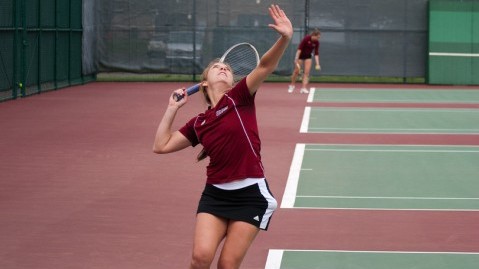 Four years ago, Jessica Podlofsky knew that she would be playing collegiate tennis.

However, at the time, the University of Massachusetts was not at all in her plans.
“I was supposed to go to a different school,” Podlofsky said.

Despite being hampered by a back injury during her senior year at Paul D. Schreiber High School, Podlofsky had everything lined up to play tennis at another university, but it was all pulled out from under her at the last minute.

“Come signing day they took my scholarship away. I didn’t have anywhere to go to school … No one was giving me other offers.”

In an effort to help his lost pupil, Podlofsky’s longtime high school coach put in a call to his college coach: current UMass coach Judy Dixon. And just like that, Jessica Podlofsky became a member of the UMass women’s tennis team.

Fast-forward to the present and Podlofsky has won more singles matches over her collegiate career than any other player in the history of UMass tennis. She needs only two more victories in either singles or doubles to become the all-time winningest tennis player in program history, a title currently held by Michelle Spiess who won 125 total matches from 2004 to 2007.

Podlofsky’s road to Amherst may have been unorthodox, but when asked about the singles record and when it had come to her attention, her answer was straightforward.

This goal-oriented mental toughness would become a staple of her time here at UMass and it has trickled down throughout the program.

As is true for all great athletes, Podlofsky aided her team in ways beyond the success in her own matches. Dixon described how, as a freshman, Podlofsky immediately benefited the rest of the Minutewomen by exhibiting a tireless work ethic, unparalleled intensity and, obviously, her ability to win.

“She made an impact right away in a lot of ways,” Dixon said. “I knew this was gonna be my kind of chick. She was going to infuse the team with just what we needed which was some feisty toughness.”

Podlofsky said she began to notice her impact when her teammates asked to play their matches on the court next to her to feed off of her aggressive attitude.

“They said that they loved my energy and the way I acted on the court,” Podlofsky said. “I’m very energetic on the court. I scream and I cheer … I think it really changed the team.”

Her drive was so inspiring that Podlofsky was voted a captain of the team as a sophomore, a move Dixon called “unheard of.”

“She led by example,” she said. “Through her work ethic, her mental toughness. The tennis team became much of a fiery team. We became street fighters and street fighting is what we do … That’s because of her.”

Dixon emphasized that this hard-nosed mantra – in a sport sometimes categorized by country clubs and a sense of civility – aided the team immensely and allowed them to compete at a higher level. Dixon and Podlofsky also agree that the team’s emotional leader has made great strides of her own.

Podlofsky attributes much of her improvement to Dixon.

“Her strengths are my weaknesses,” Podlofsky said of her coach. “She’s really good at the net, really good at doubles. She’s been able to teach me things that don’t come naturally to me. It’s always nice to have a really tough coach. I’d rather be yelled at than babied.”

Midway through her senior season, Podlofsky continues to perform at a tremendous level. She was recently named the Atlantic 10 Tennis Performer of the Week as she won all of her matches over the spring vacation, breaking the career singles record in the process.

When asked what it means to be the record holder, Podlofsky responded humbly.

“It obviously feels good, but when I decided that this was my goal, I didn’t want to just break the record; I wanted to break it by a lot. … I don’t really have a number of wins that I want to reach. This is a team sport, the goal now is to win the A-10,” she said

The senior standout also expressed some unrest about approaching the end of her career.

Podlofsky seemed content about how much she has accomplished throughout her time at UMass.

“I wanted to be a leader. I wanted to make an impact on this team and have people follow. … I still had some growing to do and I was put in a position that I was forced to lead people early on, but I think that goal was accomplished…If you believe in yourself on the court, you’ll believe in yourself off the court. I hope that I’ve given that chance to some of the other people on our team.”