“Rucking” not allowed at Boston Marathon 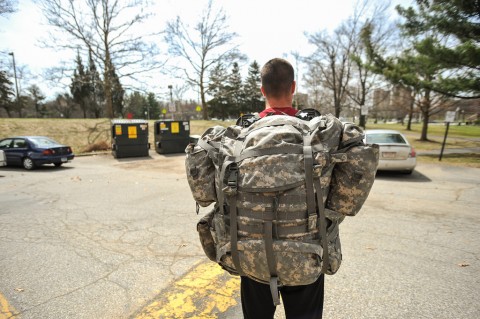 This year, spectators at the Boston Marathon won’t see ROTC students from the University of Massachusetts running the race and it’s not because they blend in so well with their camouflage uniforms. The marathon will be devoid of many runners from previous years because of new security policies put in place in response to last year’s bombings.

Students involved in the ROTC program at UMass have been involved with the Boston Marathon in past years. The group would “ruck it” the entire 26.2 miles, which involves moving at a slow jog, in full uniform and carrying a ruck sack filled with approximately 50 pounds of supplies.

This year, for the first time in many years, the students in the ROTC program will not be able to partake in the marathon the way they typically do, because of one of the many new restrictions in the race this year, including but not limited to, a ban on backpacks.

The “no bags” policy was announced to the public in late February, and is in conjunction with a series of other banned items. This is putting a damper on some participants this year, including UMass students commissioned for military service post-graduation.

The policies, which according to the Boston Athletic Association website, include a ban on items such as CamelBak personal hydration systems, any type of rolling suitcase or bags, props for runners including military and fire gear or any flags larger than 11 by 17 inches.

Backpacks and any kind of handbags are prohibited from the premises, as are any items larger than 5 by 15 by 5 inches. Bulky costumes will be prohibited and security is also allowed to prohibit any other object they deem necessary at will.

Tom Grilk, the BAA executive director said in a Boston Globe article that the policies were a “part of a collaborative process with public safety authorities.”

Michael Shaughnessy, a senior and a contracted cadet with the ROTC program at UMass, was responsible for running the marathon team this year.

“It was one of the best things I’ve done in ROTC,” Shaughnessy said. He had been a part of the marathon group since he was a freshman at the University. This year would have been his fourth time.

Although the team could carry on and not partake in the race with their backpacks, Shaughnessy explained that the marathon was partially for training purposes.

“As cool as it is, it’s also training. It trains people to learn to carry that load for a long period of time,” he explained. To walk it without the rucksack would “take away that military aspect” he added.

“That sort of defeated the purpose to just walk it. And to run it, you need to qualify,” he said.

There was also the aspect of personal enjoyment, too.

“I don’t care if you played big time high school sports in front of crowds of a lot of people,” Shaughnessy said, “there’s no adrenaline rush like running the last 100 meters through the finish line.”

Shaughnessy remembered the excitement in previous years of the team working its way past the colleges, with patriotic chants of “USA” as they passed. In military uniform, the experience was quite fulfilling.

The team would start its run early in the morning, before the water stations were even opened. As they worked their way into Boston, the city began to wake up around them and towards the end they would see more spectators.

Last year, Shaughnessy and his group of ROTC students started the race much earlier than usual, which he said at the time was a nuisance. Now he sees it as a blessing. They finished about an hour before the bombs went off.

Shaughnessy said he knew something was wrong when all the phone lines went down and could see people milling around his cab. The rest of the ROTC group were in vans on their way home, and heard about the bombings on the radio. They called him as soon as they could.

“The thing that sticks with me was watching the footage and then seeing two National Guard guys in uniform that start pulling apart the bleachers,” Shaughnessy said.

He felt a sense of pride knowing military men were some of the many first responders running headfirst into the action.

Shaughnessy will be graduating this year with a degree in public health. He will be commissioned as an ordinance lieutenant, and will be going for training at Fort Lee in Va. this October, with a possibility of going overseas after.

“It would have been nice to say I did it four years in a row.”

Justin Surgent can be reached at [email protected].