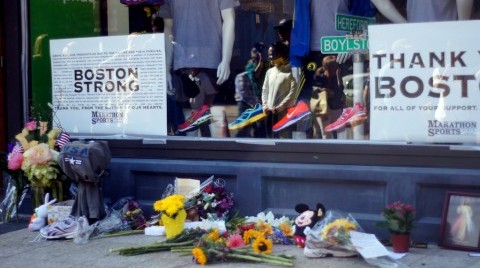 After months of anticipation, hard work and mental readying, marathon runners dream of that glorious moment when they will triumphantly cross the finish line, cheered on by spectators and congratulated by friends and family. On April 15, 2013, however, that celebration was robbed from thousands of runners at the Boston Marathon when the finish line became the scene of frantic rescue efforts from two consecutive explosions.

Phoebe Hanley and Sarah Joyce, close friends who had done multiple race events together in the past, were among these runners. Neither had run a marathon before, but they were both able to qualify for the 2013 Boston Marathon. Sarah raised money for the Dana Farber Cancer Institute, and Phoebe qualified through her university’s nutrition program at Tufts University.
Around the third mile, Joyce separated from Hanley, who was running with other friends from the Tufts program. She was about 50 feet from the finish line, having just completed the race, when the first bomb went off at 671-673 Boylston Street.
“I was walking away from the finish, ecstatic to be done and heard something that sounded like a cannon,” Joyce said. “When the runners around me turned around all we saw was smoke. My instincts kicked in and all I knew was I needed to go in the opposite direction of the explosion. It’s weird because almost right away I knew it was a bomb. You just feel it.”

Joyce immediately tried to contact her parents and sister, who she had expected at the finish line, but cell phone service had shut down following the explosions.
“I just walked and called and walked and pressed send over and over again,” Joyce said.

Joyce recalled seeing other runners around her collapsing or screaming in reaction to the explosions, but she primarily remembers the impressive abilities of those who began offering help almost immediately.
“There were people who panicked, yes, but I had at least five people offer to help me when they saw I was alone,” she said. “I had a couple walk me to a hotel where they heard families were reuniting and I saw numerous people offering runners food and water.”

Joyce was then able to reach her family, who had gotten caught in traffic and pulled over repeatedly by ambulances. They did not know what had happened until she told them.
She said was comforted by the voice of her sister, who remained calm over the phone.

“It’s amazing how the people you love and even strangers pull through for you,” Joyce said.

The finish line had been closed down by the time Hanley would have reached it. She was at mile 22 when the bomb went off, but was unaware at the time. It was not until around mile 24.5 that the news came to her.

“Basically what I was told was ‘multiple explosions at the finish line. There are tons of people going to the hospital. The finish line doesn’t even exist anymore.’”

Hanley and those around her continued to run even as they received this news.

“Some people couldn’t register it and just kept running, and just got quiet and serious,” she said. “Some people couldn’t register it and just completely broke down, screaming, crying, collapsing in hysterics. At that point in the marathon, your body has nothing left, and your mind only has enough to concentrate on the fact that you have to keep moving your legs, so a lot of us didn’t know how to process any of this.”

Hanley said she had two friends running with her assuring her that everything was fine and remained calm at first, but then quickly became frightened at the thought of her family, who was supposed to be waiting at the finish line, and the reactions of those around her who panicked.

“But I couldn’t stop running,” Hanley said. “At this point, the race was just a street of mobs of runners that were all crying at different volumes.”

Looking back on the moment, Hanley said she found it difficult to recall exactly what she saw pertaining to the explosion, as her and the runners around her had only been focused on the race.

“Before I had known what had happened, I didn’t even realize that no one was cheering us on anymore,” she said. “I didn’t realize that a lot of people were walking in the opposite direction. I didn’t notice sirens. All I heard was a voice in my head saying, ‘move your feet, move your feet. You’re going to cross the finish line.’”

However, Hanley and thousands of other runners ultimately would not. Among a mixture of emotions that were triggered by the incident, she said she could not help but feel angry that she was unable to cross the finish line.

“At the time, I obviously was so thankful for the safety of my friends and family and I was so hurt for those that had been killed, injured or affected, but a huge part of me was just so upset that none of these runners, myself included, were able to celebrate the feat they had just conquered,” she said.

Joyce often talks about the fateful day with Hanley, and sympathized with her disappointment.

“Anyone who has ever trained for a race must know how frustrating it is to put you time focus and energy into something only to have the ability to tell yourself you completed the task be taken away from you,” Joyce said.

“That they were able to put themselves aside and focus on the safety and wellbeing of the people around them, rather than the sense (of) accomplishment they had been waiting for for months.”

All of these runners have been offered a re-entry access for this year’s Boston Marathon. Hanley will be running again with Joyce to cheer her on along the way.
“Phoebe’s decision to run again with her automatic re-entry is inspiring and I honestly don’t know that I could’ve done it,” said Joyce, who added that she has found it difficult to enjoy running in the same way she did before the Boston Marathon bombings occurred. She noted, however, that she has recently been running again and did a few training runs with Hanley.

“I’m starting to take baby steps again,” Joyce said. “That’s what I’m hoping to gain by going back again this year: remembering why I love running.”

As for Hanley, she looks forward to finishing what she started with thousands of other runners.