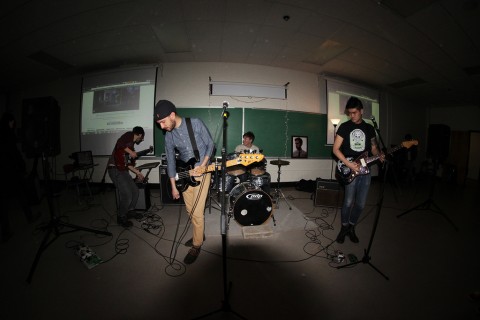 It’s not always easy for small time local bands to find places to play for a crowd in this area, and when they do it’s not always under the best conditions. Amherst has always had something of a thriving local music culture, with a good amount of it being limited to bars or open mic nights in the area, but there has always been an active DIY community of people who just want to share their work.Many of these bands perform locally or tour around the area playing crowded house shows and basements. While the heart of this community lies deep within the dusty cellars of these small, busy houses, these shows aren’t always the safest way to go about playing music. That’s why Liam Cregan, Mark Hillier, Eli Albanese and Lenny Schwartz, of the local group Shakusky, decided to form the new RSO on campus, Students for Alternative Music, or SALT.

The idea is to host shows for local bands to play on the UMass campus, and to move away from riskier DIY venues which often get shut down by police due to overcrowding or noise complaints.

“Pretty much the big reason for this organization is to have a safe alternative to house shows which can get pretty dangerous at times,” said Cregan. “Dangerous in terms of too many people being in a place where there are no exits essentially. And also dangerous in the sense that the bands are at risk of not being able to perform because of law enforcement.”

SALT started off around two years ago as a group on Facebook for members to share music with one another before Hillier, Cregan, Albanese or Schwartz were involved in it. For a while, it stayed that way until Hillier posted in the group asking if anybody was interested in trying to get SALT recognized as a UMass organization that could host shows on campus. A few people jumped onto the idea and they held a few meetings, but after their initial application they were denied by the administration who suggested they try to join the University Programming Council.

“That fizzled out until last Fall when Liam was like ‘let’s start an RSO to do this,’” said Hillier, “So I shot Liam over everything that we had written before, and we applied again… and then it got started.”

This semester alone, SALT has done four shows around campus by booking rooms in places like the Agricultural Engineering Building that offer enough room for a few bands to play with a decently sized crowd. Local acts such as Who’da Funk it?, Kid’s Choice, Sexy Girls, Shakusky and plenty more have been performing at these events.

“Booking is mostly just networking and meeting people who are interested in the same things,” says Cregan, “This organization is kind of coming out of a community that already existed, so we already do know a lot of people and we kind of rely on that network of people within the Amherst community to get our name out there and get people to come to shows.”

In the future, SALT is looking to expand and become better known in the area so they can share the local music culture on an even larger scale. They also hope to start putting out a zine to spread awareness local visual art, poetry, shows, reviews and anything else within that scope.“We’re going to start pushing Amherst as a cultural hub out in more ways than just music, but music is where it all started and hopefully more and more things will spring out of it,” said Hillier.