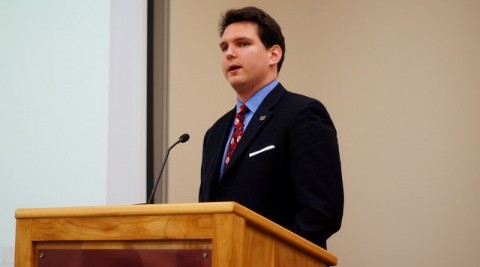 The Student Government Association, Graduate Student Senate and University of Massachusetts administration signed a shared governance agreement earlier this semester that establishes new advisory boards to the Chancellor and aims to improve communication with student government.

According to the agreement, which was signed on Jan. 22 by UMass Chancellor Kumble Subbaswamy, SGA President Zac Broughton and GSS President Robin Anderson, the Chancellor is required to establish three new advisory boards. These boards include Academic Affairs, Administration and Finance and Student Affairs.

The agreement also requires the Chancellor to meet with members of the SGA and GSS at least twice a semester to discuss relevant University policies and initiatives.

“I think this is reflective of the Chancellor’s commitment to being very student-focused. He really wants to have the input of the students,” campus spokesperson Ed Blaguszewski said. “He goes to many campus events in a variety of contexts, but this really formalizes the interactions. … We can all get busy, so unless we anchor our calendar to specific meetings, like the agreement does, we can fail to address certain issues. This is a way to say we are really getting the input that we want and need from students.”

Broughton, a senior studying political science and legal studies, said he was excited about the agreement.

“More student voice means a better future for the University,” he said.

According to Broughton, before the agreement, the Chancellor and Vice Chancellor of Student Affairs would meet directly with only the SGA president multiple times a month.

Broughton said he sees the new advisory boards as a way of creating new opportunities for more student voices to be heard, including voices outside of the SGA.

“The cancellation of EDM shows on campus really acted as a catalyst for getting the agreement into writing,” he said. “The SGA leadership had doubts about the administration’s authority to do so and wanted to be a bigger part of the decision process.”

When asked about reception by the administration, Broughton was positive.

“The great thing about this Chancellor and Vice Chancellor is that they really do care about student input,” he said. “They have been really receptive to the new boards and student ideas.”

In terms of the future, Broughton hopes to see this agreement used as a model to create even more advisory boards, saying that “the best part about the language is that it doesn’t put limitations on what boards we can and can’t have.”

Robin Anderson, president of the GSS, was also a co-signer.

“The advisory boards, I believe, were a reaction to the ongoing voices of the student body who were calling for more participation in University governance over the past couple of years,” Anderson said in an email. “Well, to be truthful, UMass has always had strong student advocacy but the administration has not always listened in the past. I think the advisory boards are one of many steps in the right direction and I do hope they are an effective means for students to advocate for policies and procedures that will benefit students both graduate and undergraduate.”

“If they simply become boards that ‘add to the conversation’ and are used as a way for the University to ‘seek participation,’ then the boards will simply become a microphone for opinions but not a sounding board for change,” he said.

In terms of future University governance reforms, Anderson said, “Imagine the headlines if UMass were to become the first in the nation to accept a democratic governance structure that allowed students, faculty and staff to have decision making and veto power on all policies and procedures. Can UMass be brave enough to even explore this option?”

Stefan Herlitz, a junior studying classics and political science, is a member of SGA and sits on the newly created Administration and Finance advisory board.

“There’s only been one meeting, but it was very productive. A wide variety of students and administrators came, for example Ken Toong, who is head of dining services. The discussion was very informative and interesting,” he said.

Herlitz hopes the board will make both specific changes, like dinning plan reform, as well as oversee an overall improvement in administrative transparency.

“Students just don’t know what is going on, who is making what decisions or how those decisions are going to affect them. We need to change that,” he said.