Straight from the stairwells, the Commonwealth 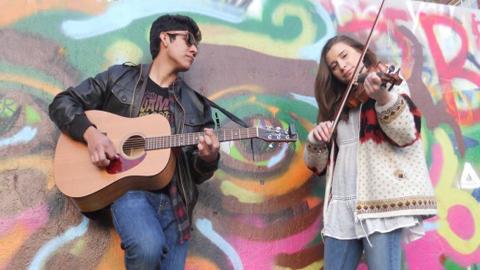 As I stepped out into the brisk March night, Miguel Paredes and Abby Kahler of The Commonwealth offered to play some of their new songs from their upcoming, untitled EP. I accept the offer, and the two UMass freshmen lead me to their dorm, Oak Hall. We arrive at a stairwell nestled somewhere between lounges packed with studying students, and they begin to set up their instruments.

Miguel unlatches his guitar case and tells me that he and Abby have affectionately named these practices “The Stairwell Sessions.” He tunes his guitar as Abby rests her violin on her shoulder. They make sure I’m comfortable on the stairs before introducing their first song. They call it “Voices,” a track that only recently acquired its lyrics.

“I had no inspiration for a while. I just read Harry Potter instead,” Miguel says.

They draw deep breaths and begin “Voices,” a ballad that would fit in with Damien Rice’s greatest hits. The song quickly draws a crowd of strangers away from their studies. Soon, the entire staircase I’m sitting on fills up with students enjoying Abby and Miguel’s impromptu concert.

When the song ends, a stranger from above shouts, “You guys rock!”

Miguel shouts his gratitude back and adds the band’s name. “We’re The Commonwealth” he says.

Miguel, a guitarist and vocalist, and Abby, a violinist and vocalist, insist that their band name has little to do with their living arrangements in the Honors College at UMass. Although the name certainly stems from the residential area, “The Commonwealth” represents their mentality.

“‘Music made by the people, for the people’ is kind of our motto,” explains Miguel. “We took like three hours straight just throwing out names.”

Some of these names included Stairwell Strings, a shout out to their Stairwell Sessions in Oak Hall, or the humorous Trippy Vegans. A friend finally suggested The Commonwealth Kids.

They didn’t love the last suggestion, but something about it caught their eye. Abby says, “Something about that word – the Commonwealth – stuck out.”

The Commonwealth packs up their instruments and we head to Roots Café. “We’ve been using the stairwell in our building because the acoustics are awesome,” Abby tells me along the way.

In February, they put on an intimate show outside when a rare ray of sunshine peeked through. They also played at the Valentine’s Day Greeno open mic. Due to inclement weather, however, they’ve mostly stuck to the stairwell and rooms in the Fine Arts Center.

Once we find a spot on the couches of the busy café, the band mates recount the story of how they met last autumn.

Abby says that she and Miguel met in their English class last semester. She says that she found him funny during the class’s icebreakers and wanted to approach him. They first met after one of these icebreakers when the class shared its favorite bands.

“Miguel rolls in like 20 minutes late on a skateboard,” Abby says.

“I was writing a song” he insists.

When Miguel shared a lot of the bands that she liked, the two finally got to talk and suggested jamming together. They did not end up getting together until February of this semester. The meeting was well worth the wait. Abby and Miguel say that as soon as they started playing, they knew they wanted to make music together.

After fruitful jam sessions, they officially formed the band. The Commonwealth’s Facebook went live on Feb. 2 and has since amassed a significant following. Several recordings of The Commonwealth’s are available on their page, including the original “Voices” and a cover of “Such Great Heights” by the Postal Service.

Both Abby and Miguel describe their music as indie folk, but acknowledge other influences like jazz. Abby reflects that they weren’t sure about what sound they wanted to pursue at first, but the coupling of acoustic guitar and violin introduces an undeniable folk element to their music.

Abby’s personal influences draw upon indie folk. She cites the Kopecky Family Band, which employs strings and cellos on their albums, as one of her favorite bands. The Commonwealth has adopted similar techniques on their own tracks.

Abby explains that Miguel will write music for a song and play it for her, and then she’ll improvise her notes over his. She finds improvisation an easier form of expression, especially with the violin. This process allows them to slowly mold each song into their vision.

Back in the Stairwell Session, they played “The Cure,” an aching strummer with gorgeous vocal harmonies from Abby. Her violin injected the ballad with a palpable melancholy, which proves her method is working. Each song they played emanated powerful emotions, both uplifting and somber.

Abby then brings up one time that her and Miguel improvised lyrics together. “We were singing about completely different things, but the lyrics made sense together.”

“That was a really cool moment,” Miguel adds.

These improv methods fit Miguel’s idea of music as a “cathartic” exercise. “Songs are like timestamps in my life,” he explains. “Whatever I’m feeling is what I write about.”

The Commonwealth is currently in the midst of recording new material, including “The Cure,” “Forever is a Long Long Time,” and “We Don’t Have Time,” which, Miguel jokes, “We didn’t have time to play.”

Miguel has a long history of recording music, since his uncle is a recording artist who has performed as a DJ at Northampton’s Iron Horse. He recalls wanting to record a song as young as five. When his uncle told him he had to audition, Miguel took his uncle’s words as an opportunity. He impressed the DJ greatly.

Abby has enjoyed a long history with music as well. She began playing the violin when she was three years old. Her parents took her to “a musical petting zoo,” where children can play with any instrument. The violin captivated her and she hasn’t looked back.

The Commonwealth dreams of playing at Iron Horse one day, a venue that Miguel admired while growing up between Amherst and California. Until then, they will be featured at open mic nights like those offered by Greeno Sub Shop and The Black Sheep in Amherst.

The band hopes to record an EP over the summer, tentatively titled “Other Words,” and plans to obtain a permit so they can play around Amherst and Noho before the semester is out. The Commonwealth has several plans in the mix, including a kick-starter for their EP. Ultimately, they want to share their craft with peers and to enjoy the catharsis of music with others.

The night has grown late in Roots Café. As we pack up, I ask Abby and Miguel if they have any last thoughts. Sharing a quick glance, they respond almost in unison.

“Shout out to our English teacher,” they say. “Thanks for putting us in your class.”

You can check out more about The Commonwealth at their Facebook: www.facebook.com/thecommonwealthsound.