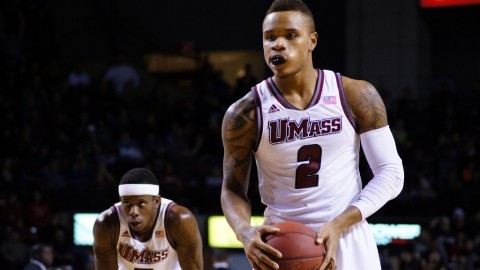 Coming out as gay isn’t an easy thing for the average person to do.

Now imagine being one of the standout players on a college basketball team, playing in a sport that is dominated by heterosexual males who are constantly trying to strut their tough guy persona and then coming out as gay.

It’s not an easy task, but it’s one that Massachusetts men’s basketball sophomore Derrick Gordon recently went through, revealing to his teammates that he is gay. It would’ve been easy for some of the members to laugh it off as a joke, or to uneasily shift in their chairs at the thought of a gay player being on their team. After all, these guys spend most of their lives in intimate settings during the season.

They could’ve turned their backs on one of their own teammates because that’s how society taught us to handle these types of situations. But this team didn’t.

Instead, they embraced Gordon – and his lifestyle – supporting him for opening up to them. Gordon showed a level of trust in his teammates to handle the news positively and they didn’t let him down.

All season long, UMass went by the mantra of “brotherhood,” that the team was one big family. A major reason why this team was so successful this past season on the court was because it shared such a strong bond off of it.

You could see the “brotherhood” in full effect sporadically throughout the season when sophomore center Tyler Bergantino made videos that showed that even while enjoying great success, or enduring tough times, this team knew how to have fun and get along.

But something was off about Gordon and his personality. Sure, he would put a mask on and act like he was having the time of his life in the videos, but deep down he had a bigger secret that was forcing him to lie to himself and his teammates.

As a gay athlete, he was in the wrong environment. He couldn’t talk about relationships with girls because he didn’t have the same experience as the other players. Most of the time, he would just retreat to his room and keep to himself.

“He wasn’t one to go out and do activities,” Bergantino said. “He kind of liked to stay in his room and play Call of Duty. He was really known for staying in his room and doing him.”

The team noticed when Gordon seemed down and like all family members do, they tried to pick him up.

It can say a lot about a team when it’s faced with a scenario that is new to it. The timing of the announcement came at the perfect time for UMass, as it has an entire offseason to deal with the rush of media attention surrounding Gordon’s decision before even dealing with games.

But it’s also a situation that can bring this team closer and in the long run, better.

“It’s going to make us much closer and I think we’re going to have a much better season than last year,” Gordon said.

Gordon’s decision to come out as gay was easily the hardest thing he’s had to endure in his entire 22-year life. He knew the reactions that he would get from the public.

The last thing he wanted was for his teammates to turn against him.

But in a true sign of brotherhood, his teammates showed him the support that he so desperately needed.