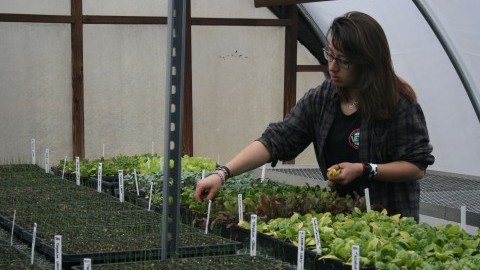 With spring arriving and the growing season about to begin, the Student Farming Enterprise at the University of Massachusetts is experiencing a bit of its own growth as well.

The farm, now entering its eighth season, has received six additional acres of land at the new Stockbridge Agricultural Learning Center on North Pleasant Street. With more land, the student farm can offer 25 more CSA shares to the campus community this fall.

In addition to the CSA shares, the student farm sells produce to the UMass Dining Commons, student-run businesses on campus such as Earthfoods Café and People’s Market, local Big Y supermarkets and at farmers’ markets.

Class instructor Amanda Brown explained that CSA shares work by having members pre-pay in the spring for a portion of the fall’s harvest.

“By paying us upfront, it allows us to be able to pay for things like seeds and supplies and labor costs,” Mandeau added.

Each share is typically 20 to 25 pounds of produce per week for 10 weeks from the beginning of September until the end of November, Brown said. This year the farm will offer 75 shares, up from 50 last season.

The student farm, which began selling CSA shares in 2009, is taking a new approach to promoting the program this year. Until May 1, members who take advantage of the Early Bird Special can save $25 by paying a total of $300 up front. Otherwise, shares are $325. A $100 deposit is due in May and the rest of the balance must be paid at the first CSA pickup in the fall.

This season, Brown said the payment process will also be more convenient.

“One really great thing we’re doing this year in addition to the Early Bird Special is now people can pay online with a credit card … whereas in the past you had to print out a registration form and send a check in the mail,” Brown said.

With more students in the class this year, Mandeau said the farm can grow more varieties of crops. The 12 students, who meet twice a week, will manage a total of 35 different crops.

Among their responsibilities are selecting varieties of crops, ordering seeds, figuring out how much land is needed to meet harvest goals and meeting with their markets to figure out how much of each crop they have to grow to meet the demand. Six students will also stay and work at the farm full time over the summer.

“When the administration decided to create this Agricultural Learning Center, they put a call out to anybody who was interested in using any of the land, and we of course jumped right on that,” Brown said.

The Agricultural Learning Center will be an outdoor laboratory for the farming, horticultural, nursery and landscape industries.

“We are kind of like the first folks who are going to be doing a lot out there,” Brown added.

Brown said that one of the best aspects of the new learning center is its close proximity to campus. She said a major appeal of farmers’ markets is that customers can actually meet the farmers, but they can also visit the farm to learn about production methods and growing practice.

“You can’t get much more local than that,” Brown said.

Student farmer Zach Zeigler, a freshman sustainable food and farming major, said that students are promoting the CSA shares with flyers around campus and on social media outlets like Facebook and Instagram.

Mandeau added that members of the student farm are also handing out business cards and tabling in Earthfoods Café. She said the response so far has been enthusiastic.

“We’re really dedicated to this enterprise and we want to be able to share what we’re doing with as many people as we can,” she added.

For three Fridays between April 11 and 25, the student farm will be selling transplants, including kale, spinach, Swiss chard and arugula, at a farmers’ market on the Goodell Lawn.