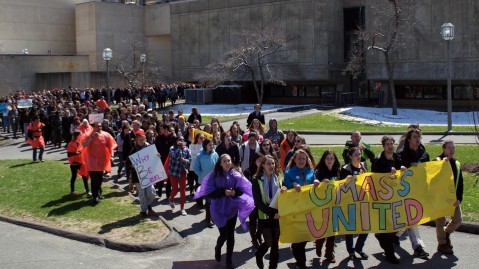 After Derrick Gordon came out publicly last week, the Westboro Baptist Church made it known they would be picketing the University of Massachusetts. When students caught wind that this was happening, a rally was planned to support Gordon and the LGBTQ community on Wednesday.

“After Derrick Gordon came out publicly, there was some backlash from different communities, specifically the Westboro Baptist Church,” said Charlotte Kelly, a sophomore.

Kelly said that Ellie Miske, a junior, and Sïonan Barrett, a sophomore, were involved in organizing this event, but noted there was help from organizations as well. She said a lot of messaging was run by the Stonewall Center and spoke with people from the Pride Alliance and the Student Government Association.

Zac Broughton, a senior and SGA President, was also in attendance.

“I’m here today to stand solidarity with my fellow students and show my support for the LGBTQ community,” he said.

The Facebook event, #UMassUnited, was created and had over 2,000 people saying they were attending. The page outlined what exactly the event was, as well as reminded students to be respectful of everyone’s beliefs and rights.

When the time to begin marching from the Fine Arts Center to the Student Union came, there were an estimated 3,000 people in attendance including students from the Five Colleges and residents of Amherst and Northampton.

“I am queer and a Christian, training to be a pastor. I really care about showing both the queer community and the Westboro Baptist Church that being queer and a Christian does not have to be in conflict with each other,” said Lizzie McManus, a senior from Mount Holyoke.

She heard about the event through a friend who saw it posted on Tumblr, and was looking forward to attending the protest.

Joseph Homsi, a senior, said that he was excited for the Westboro Baptist Church to come to campus.

“For me, this was coming out to say that Christianity is accepting of all kinds of people, no matter the sexual orientation, color, race or gender. And I just wanted people to know that and get that message out there because for me, it was a struggle to understand that and I feel like now I have come to understand it, it is my responsibility to help spread that teaching.”

Homsi went to a Catholic school for 13 years, and said it was difficult for him to come out. However, he talked to priests and different support groups, and came to putting his faith and sexual orientation together.

Nate Budinton and Cindy Stahler, residents of Northampton and Amherst, heard of the event from a newspaper article.

“I’m here in support of (Derrick Gordon) and of a safe and loving environment at UMass and in the town of Amherst,” Budington said.

He recognized the Westboro Baptist Church as having a right to speak, but sees them as a group that has completely missed the meaning of Christianity.

Stahler, a resident of Northampton, said she heard about the event and began to e-mail people to attend in support.

Students flooded in front of the Student Union, chanting things like “Black, white, gay, straight, love does not discriminate,” and “Hey hey ho ho, inequality’s got to go.” There were several speakers who stepped up to give speeches and tell their own personal stories.

Alex Russell, a food science major, spoke of her struggles and feeling as though she was stuck in the closet at one point.

“A lot of stuff gets put into that. You have those things that you need on a daily basis that go right on the shelf in the front. But there’s always that pile in the back, the stuff that gets pushed back and forgotten, stuff that’s hidden, the stuff that you can’t find unless you’re really searching for it. People aren’t meant to be in them. And yet a closet is a perfect analogy to where I was not too long ago. I felt buried, trapped by fear.”

Russell continued, and said that the UMass community has been welcoming and supportive, but noted that this is not the case in other places.

The Westboro Baptist Church tweeted multiple times of their plans to picket, but did not specify where they would be. However, they said they would be picketing from 12:15 p.m. until 1 p.m.

There were five members of the church standing on the side of Massachusetts Avenue, holding signs and playing music. The lyrics of the songs were remixes of popular top 40, including the change of Bruno Mars’ “Grenade” to “God has a grenade for ya.”

A crowd of approximately 100 people gathered across the street, many of them yelling obscenities at the picketers. At one point, the crowd began to chant, “Fred Phelps is dead.”

Police were on the scene, keeping the crowd on the curb and out of the street, and preventing anyone from crossing the street and getting close to the Westboro Baptist Church.

Most students said that the event for Gordon and LGBTQ support was a good way to send a message about love. Kelly said, “Love wins. Support wins. Solidarity wins. And (the WBC’s) movement doesn’t have any solidarity.”

Catherine Ferris can be reached at [email protected] and followed @Ca_Ferris2.