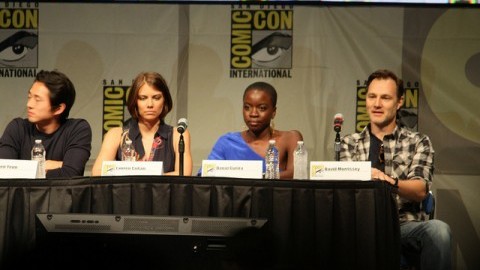 Editor’s note: The following review contains spoilers for Season 4 of “The Walking Dead.”

“The Walking Dead,” AMC’s zombie saga, concluded a very uneven fourth season with an excellent finale that saw sheriff’s deputy Rick Grimes (Andrew Lincoln) pushed to the edge. In the show’s most disturbing sequence yet, Joe’s (Jeff Kober) group attacks Rick on his way to Terminus, eager to exact revenge.

It’s impossible not to tremble when Joe’s gang jumps Rick, Michonne (Danai Gurira) and Carl (Chandler Riggs). Then one of the thugs tries to rape Carl. This sends Rick over the edge, and he rips open Joe’s throat with his teeth before stabbing Carl’s assaulter countless times. The roadside scene contains so many horrible moments at once that it is unequaled in terror even in “The Walking Dead’s” grisly canon.

Some fans have complained that the show is upping the shock factor just to stay relevant. Two episodes before the finale, “The Grove” broke two taboos. First, unstable Lizzie (Brighton Sharbino) murders her little sister, believing she will reanimate as a friendly walker, and then Carol (Melissa McBride) shoots Lizzie, uttering the now infamous line, “Just look at the flowers.”

Both Lizzie’s death and the roadside showdown worked for me, despite mounting criticisms. They were disturbing, yes, but also effective. The apocalypse is finally touching all of its survivors. Lizzie’s affinity for walkers makes sense, since some children would be desensitized two years after the turn. Rick is devolving into a savage protector who can actually handle the threats streaming his way.

Happily, show-runner and writer Scott M. Gimple saved these two moments for the end to leave a good taste in our mouths over the summer. Season 4 was a mess, constantly changing tones, narrative styles and timelines. After a strong debut, bolstered by an epic helicopter-and-walker rainstorm, it tumbled downhill fast.

Too many wandering monologues drove the show nowhere, save for Hershel’s (Scott Wilson) moving speeches. The virus storyline had promise, but the characters mostly wither away in the sick bay while Daryl (Norman Reedus) leads a generic rescue mission. Then the show inexplicably pivoted back several months to catch up with the Governor (David Morrissey).

I was all for having the Governor back. Morrissey ranked among the finest actors on the show from the moment he waltzed on-screen. But reserving two episodes entirely for the villain, whose story had absolutely nothing to do with the preceding five episodes, made Season 4’s first half a bumpy ride.

The second half took a while to get on its feet. It was an eight-part road movie with characters orbiting around each other. Nonetheless, it had its strengths, like a heartbreaking hour shared by Daryl and Beth (the excellent Emily Kinney). When Daryl confronts Beth in his teary, drunken mess, “The Walking Dead” enjoys some of its most emotional performances yet.

Carol returns in a blaze of glory and saves Tyreese (Chad L. Coleman) and the girls from walkers. McBride’s performance this season was both engaging and moving. Carol, once a victimized housewife, has evolved into the show’s most developed character and a true leader.

Her transformation finally rubs off on Rick as well. Although he exiles Carol in the first half, he slowly accepts her doctrine of killing to protect. The look in his eyes after eating Joe’s throat – calm, placid and undisturbed – says it all.

This season also introduced us to Sgt. Abraham Ford (Michael Cudlitz) and Dr. Eugene Porter (Josh McDermitt), two men with connections in Washington. Apparently Porter knows the secret to the zombie virus. He holds the hope for humanity, and the hope for the show as it aims to shake up its game a bit.

Once the characters wind up at Terminus, Gimple capitalizes on his powers of suspense. Rick sneaks in the back door, for once wary of the right strangers. After all, Terminus is kind of a foreboding name for a sanctuary, don’t you think? One look at that woman grilling meat reveals the sanctuary’s morbid secret.

Hopefully Gimple will pen more episodes in Season 5. Whether they’re linear narratives, like “The Grove” and “Clear,” or time hopping, Tarantino-esque beauties like “A,” Gimple’s entries never fail to have us on the edge of our seats. Other writers have produced reliable episodes that fail to be the sophisticated mindbenders they want to be.

With Gimple at the helm, the show’s future shines brighter than its bloody scenes. Then again, “The Walking Dead” show-runners have had as long a lifespan as the program’s characters.

While “The Walking Dead” slowly matures, I’m excited to watch Rick thrive in his new role. I’m itching to watch the tempest about to consume Terminus. So long as a quick fix doesn’t save our heroes, we’re in for an incredible fifth season.

As Rick said, “They’re screwing with the wrong people.”