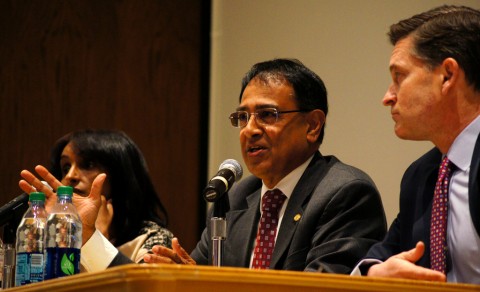 UMass Amherst Chancellor Kumble Subbaswamy initiated a campus-wide strategic planning process in the 2012-2013 school year. The Provost’s office and Faculty Senate together formed the Joint Task Force on Strategic Oversight (JTFSO) to facilitate Phase I of the process. “Innovation and Impact,” issued by the JTFSO a year ago in the spring of 2013, outlines the strategic plan. Part I of the document proposes to build a “Culture of Evidence” by “demonstrat[ing] meaningful accountability,” “embrac[ing] student outcomes assessment,” and “promot[ing] evidence-based, intentional resource allocation.” The task force clearly states on page six its desire to change the way we think: “From time to time, events demand a fundamental rethinking of how we fulfill our mission in society. This is one of those times.”

In November of 2013 the Joint Task Force on Resource Allocation (JTFRA) spun out of the JTFSO. (Set aside, for the moment, the fact that the phrase “joint task force” comes from military operations involving multiple branches.) Thus began the implementation, or phase two, of the campus’ strategic plan.

While the Chancellor identifies an interim accreditation report for the New England Association of Schools and Colleges as the reason for instigating the strategic planning process, behind that lies the broader context within which universities everywhere operate. We have faced a long term devaluing of public higher education. As states’ revenues decline due to tax breaks for corporations and the wealthy, university budgets are slashed, and tuition and fees rise. This ongoing situation was worsened by the 2008 recession. Across the country, more universities are reviewing their budget models.

All too often, the response to declining revenue is to make cuts, increase efficiency, furlough staff and faculty and freeze hiring. These are the politics of austerity, which offers market-based solutions to problems created by the market in the first place. We’ve reaped the results since 2008: ballooning student debt in excess of $1 trillion; increasing reliance on part-time, non-union adjunct labor and excessively compensating administrators and athletic directors. UMass is not immune to these politics.

To help chart a new course for the University of Massachusetts’s flagship campus, the Chancellor hired Huron Education to guide the JTFRA’s process. Huron is a consulting agency that works in the fields of education, healthcare, finance and law. A quick Internet search of that company shows it was formed by former execs of Arthur Anderson, an accounting firm which went under as part of the Enron scandal in 2001-2002. Huron had a mini-scandal of its own around 2009 or so, causing a number of top executives to leave the corporation. This led to a lawsuit from some of Huron’s shareholders. I raise this point not because I suspect Huron of wrongdoing, but rather to question the culture of a corporate consulting firm within a capitalist economy. I am suspicious of market-based solutions to problems created by the market economy in the first place.

The JTFRA was tasked with considering alternative resource allocation models. Huron was hired as consultants, but they literally wrote the book on RCM budgeting. Whoever hired them must have had an idea of the end result they were seeking already in mind. The book “Responsibility Center Management: A Guide to Balancing Academic Entrepreneurship with Fiscal Responsibility,” distributed by the administration to the JTFRA and other committees, states on page 29 that “RCM bears a strong resemblance to the profit center model of many modern for-profit corporations, particularly conglomerates and multinationals. The two environments share many similar, if not identical, reasons for decentralization.” It is written by John Curry, et. al. Mr. Curry, managing director for Huron Education, was one of the consultants who came to UMass to work with the JTFRA.

The customized Resource Allocation Model (RAM) and Resource Allocation System (RAS) developed by the JTFRA under Huron’s guidance is intended to align budgeting decisions with strategic goals, goals that are themselves a form of neoliberal governance. While we have customized RCM budgeting to fit our campus, it is still a product of the corporate world. Before implementing this incentive-based budgeting, we need to ask what behaviors we are trying to promote. Deans are going to be “incentivized” to keep costs down and be as efficient as possible in order to be as strategic as possible while they start looking for new revenue streams. These streams include aligning research priorities with national and state priorities (in pursuit of the dollars attached), and increasing out-of-state enrollment, but not turning around the decades-long decline in funding from the state. Strategic investment, in this case, becomes the means to move the strategic plan forward. Teaching and research are seen as sources of revenue, not common goods in and of themselves. Students are “butts in seats,” not future citizens of the commonwealth.

The Slovenian philosopher Slavoj Žižek talks about a concept he calls the “chocolate laxative,” which refers to a situation where the cause of a disease is prescribed as its cure. This is how I see the current initiative coming out of the Chancellor’s strategic planning process to reconfigure/decentralize resource allocation. More of what caused the problem in the first place is prescribed to guide our way out of it. This is the essence of neoliberalism—austerity, which benefits banks, corporations and the elite, is prescribed in response to the crisis—a crisis created by bankers, corporations and the elite to begin with.

If you are concerned by these issues, then please attend the campus open forum held by the JTFRA on Monday, April 14 from 1-2:30 p.m. in Campus Center room 163C.