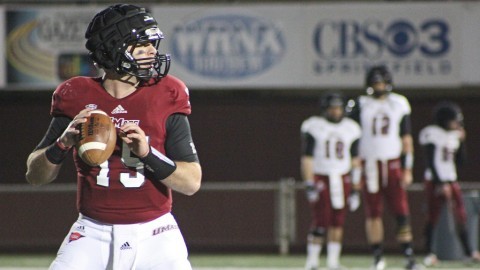 A.J. Doyle completed 18-of-33 passes for one touchdown and one interception. But it wasn’t about that.

Jalen Williams caught eight passes for 68 yards and a touchdown. But it wasn’t about that.

Da’Sean Downey had five tackles, including a sack, one interception and a pass break up. But it wasn’t about that.

Team Minutemen, consisting of the first team defense and second team offense, won the game 21-6 over Team UMass. But it wasn’t even about that.

Wednesday night, under the lights at a McGuirk Stadium undergoing renovations, was about another step forward, no matter the size of the step, for a program heading in a new direction under head coach Mark Whipple.

The team began this new direction roughly three months ago when it hired Whipple after the program won a total of two games in the first two seasons of playing in the Football Bowl Subdivision and the Mid-American Conference under previous coach Charley Molnar. And Whipple is already seeing those steps forward for the team.

“This group, whatever we’ve asked of them to do they’ve done and that’s probably the most important thing,” Whipple said. “Whether it’s raining yesterday or it’s snow in winter conditioning and it’s five degrees or whatever it was, they just came to play and we are looking to get better.

Not everything is new with Whipple, as he was the head coach of the Minutemen when they played in the Football Championship Subdivision from 1998-2003. The team won its only NCAA I-AA National Championship under Whipple in 1998 as well.

But the schemes the team ran on Wednesday and are expected to run going forward are completely different than the program’s previous two seasons. Whipple has a pro-style offense, which calls for the quarterback to be under center instead of the shotgun. The defense is also undergoing some changes as it switches back to a 3-4 base set.

The initial advantage for which side of the ball has embraced the new schemes quicker goes to the defense, as it had a total of three sacks, two interceptions – Downey and John Robinson-Woodgett – and a fumble recovery off of a botched snap.

The defense of Team Minutemen got to Doyle right out of the gate as he was under constant pressure. The first offensive drive for Team UMass ended when Peter Angeh made easy work of the offensive line and sacked Doyle right up the middle.

“We got a great pass rush so far the entire spring,” Doyle said. “I’m just looking forward to seeing what they can do this season. But at the same time as an offense, we need to pick it up. We shouldn’t have allowed that much pass rush tonight, but we did.

“And now we know over the summer that’s one of the things we’re gonna have to really work on.”

One of the leaders of the defensive attack also signaled a new direction as it came from Downey, who is a freshman. The outside linebacker made his presence known all over the field and capped off the night with an interception of Doyle, which he returned for 40 yards.

“It gave me a lot of confidence being a freshman,” Downey said. “It really boosted my confidence. A lot of the guys on the team said they don’t look at me as a freshman anymore since I enrolled early. I was grinding with them all winter in the weight room and everything.”

Special teams also made a cameo in the turnover battle on Wednesday when Joe Colton picked up a loose ball after Team UMass botched a kickoff.

Some of the other impact players on offense consisted of Team Minutemen quarterback Todd Stafford, who completed a touchdown pass to Shakur Nesmith that was initially tipped by the defender, Nesmith (57 receiving yards), and Shadrach Abrokwah (55 rushing yards and a touchdown). Lorenzo Woodley was kept at bay for most of the night with 10 carries for 28 yards.

But once UMass returns to McGuirk for summer practices, Woodley’s 28 rushing yards and Doyle’s interception will be an afterthought. It will be all about continuing on a new direction for a reinvigorated program.

Cameron McDonough can be reached at [email protected] and followed on Twitter @Cam_McDonough.