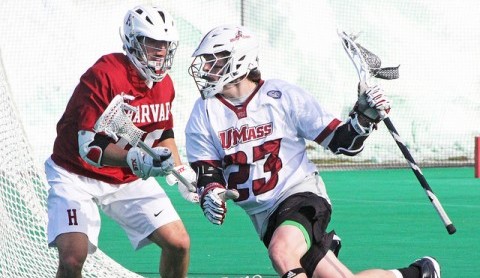 When you look at the Massachusetts men’s lacrosse team, it’s nearly impossible to overlook the production the freshmen class has brought to the table this year.

Whether it’s been Nick Mariano and his team high 26 goals, good for second amongst freshmen in the NCAA, Grant Consoletti, who’s started in all 11 games he’s played in, or Aaron Madaisky, the 6 feet 7 inch long stick midfielder that is tied for the tallest player in the country, the freshmen always seem to make big plays when the game is on the line.

“They’ve all been pretty solid,” said UMass coach Greg Cannella. “I think we are in the situation we are in because we might have relied on them a little too much. As a coach you never really want to count on five or six freshmen on your team.”
Cannella added that while it’s great to have two or three complimentary freshmen, it’s a hard transition not only with the games, but with school as well.

Prior to the season, Cannella along with the other coaches knew that the freshmen class had plenty of talent. However, their skills were quickly put on display as Consoletti (one goal) and Mariano (two) each scored in the first quarter of their first collegiate game.

“I didn’t know a lot of the other guys coming into the season, but what we’ve done has been incredible,” Austin Spencer said. “The freshmen class as a whole is a really close, tight knit group. We all get along really well and seeing them do well really helps us grow together both on and off the field.”

Spencer earned his first start of the season this past weekend against Hofstra. Spencer’s 10 caused ground balls are second on the team behind starting defenseman James Fahey.

Another freshman that earned his first career start against the Pride was Brendan Hegarty. The 6-foot-1-inch 225 pound attackman has scored two goals in nine appearances.

“It’s really hard to tell at the beginning of the year how good a freshmen class is going to be,” said Hegarty. “We’ve got a great group of guys but when we are out there, it’s all about making the most of our opportunities and we’ve seemed to do that.”

If scoring twice in his freshmen debut wasn’t enough, Mariano once against showed he was capable of playing on the big stage as he scored the game winner in overtime against No.14 Ohio State at the time in the Moe’s Southwest Grill Classic on Feb. 16.

Once more in the winding seconds against Towson on April 5, the Minutemen called upon Mariano to send the game into overtime, only to come up short on a shot that was saved by the goalkeeper.

Following the game Mariano said that he wanted the ball in his stick with the game on the line and wanted to be the one to take the final shot.

A lot has changed since the first game of the season and now, with the regular season coming to a close, the freshmen no longer feel like first-year players. They’ve been here long enough to know what is expected of them and what to expect both on and off the field.

But with the final game against Delaware approaching on Friday night, UMass isn’t ready to wrap up its season just yet.

“With this being possibly the last game of the season we are really focused on playing as a senior (would) and playing for the seniors,” Spencer said. “We don’t want this to be our last game. We want to make a run in the NCAA tournament.”

Although there have been plenty of growing pains for the freshmen and for Cannella, one this is certain: this freshmen class has definitely exceeded expectations and can only help the program moving forward.