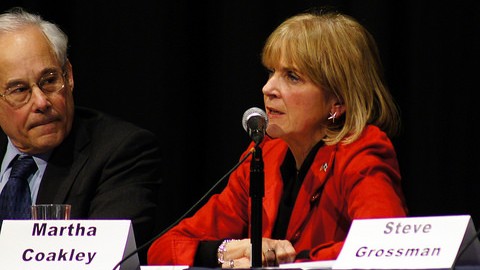 Massachusetts gubernatorial candidate Martha Coakley has emerged as a frontrunner in both the Democratic primary and the general election according to a new University of Massachusetts poll.

Coakley has an 11-point lead over Republican candidate Charlie Baker in a potential general election – 45 to 34, with 21 percent of voters undecided.

In the primary race, she holds a 30-point lead among registered Democrats, 39-9 over State Treasurer Steve Grossman. Former Boston Globe columnist Juliette Kayyem and former Administrator of the Centers for Medicare and Medicaid Services Donald Berwick hold three percent each, but an additional 44 percent of respondents said that they were unsure whom they would vote for in the Sept. 9 primary.

“Coakley has a wide lead over her Democratic rivals, but that gap may reflect the fact that she benefits from greater name recognition,” said Brian Schaffner, director of the UMass poll, in a release. “And with such a large share of Democratic voters still undecided, there is plenty of potential for this race to tighten up.”

“Coakley’s efforts to rehabilitate her image in the wake of her failed run for Senate in 2010 seem to have paid off,” said Tatishe Nteta, associate director of the UMass Poll. “While Baker has shored up support among Republicans in the state, our results indicate that he still has work to do in courting the support of middle-of-the-road Democrats and independent voters necessary for a general election victory.”

In the pool of hypothetical general election matchups, Coakley is the only Democrat with a double-digit lead over Baker, largely because of her 17-point lead over women. However, between one-fifth and one-third of voters remain undecided in the general election, meaning that Baker or another Democratic candidate could easily tighten up the race.

“A consistent pattern in recent elections in the Commonwealth is that Democrats tend to win when they carry women by at least a 10-point margin,” Schaffner said. “Coakley is currently exceeding this threshold while the other potential Democratic nominees fall short. Her lead over Baker is impressive, but the campaign has barely started, and with so many voters still undecided, the governor’s seat is still very much up for grabs.”

The results of this poll are starkly different from the straw poll conducted two weeks ago at the College Democrats of Massachusetts convention, in which Coakley garnered only 14.7 percent and Kayyem was the leader with 39.5 percent.