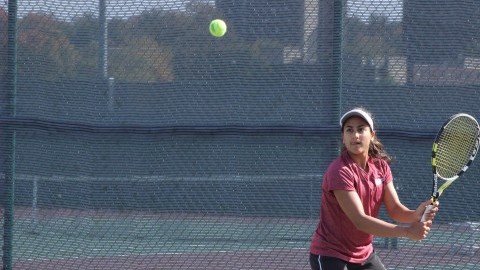 At the start of the season, not many would have predicted that a freshman from New Delhi, India, would boast the best dual meet record on the Massachusetts women’s tennis team.

But Aarzoo Malik has done just that.

With an 11-5 dual meet singles record, Malik has been the most consistent player for UMass, competing predominantly at the No. 2 and 3 spots. She played a critical part, once again, in the Minutewomen’s 6-1 victory over Sacred Heart on Saturday.

UMass started the match off strong, sweeping the doubles matches which included an 8-5 win from Malik and Jessica Podlofsky in the No. 2 spot. Malik later tallied up another singles victory against the Pioneers’ Paige Olson (6-4, 6-4) at No. 3 singles. Yuliana Motyl and Anna Woosley, who have recently turned into the Minutewomen’s most reliable doubles pairing, won their third straight match together. Motyl also provided a dominant performance in singles, winning her match at No. 2 singles without dropping a single game. Chanel Glasper also put up a double bagel at the No. 6 slot.

Podlofsky, now officially the winningest tennis player in UMass history, also recorded a victory in singles, pushing her record for most career singles victories to 73.

The team cruised to victory despite playing without sophomore Arielle Griffin, who rested with an injury, a recurring obstacle for the Minutewomen all season long. In fact, this UMass team has played only 10 of its 18 matches at full strength.

“We got away with (injuries) at Sacred (Heart),” Minutewoman coach Judy Dixon said. “We’re a good team that has not been able to put together a full roster. … If we don’t play at full strength, we’ll suffer.”

Dixon’s words were spot on during UMass’ match against Fairleigh Dickinson on Thursday, as Malik’s large impact was felt again, this time, in her absence.

Malik, hindered by a back injury, only played doubles, so a handful of Minutewomen had to play up a spot in singles. The shift was too much to handle for UMass as it fell to the Knights, 4-3, snapping a four-match winning streak.

The day started on a promising note as the Minutewomen grinded out two doubles wins to secure the doubles point, a key part of Dixon’s formula for winning through doubles and depth at the bottom of the lineup. But despite its efforts, UMass could only pull out two singles wins from Sonia Bokhari at the No. 2 slot (7-6, 1-6, 6-4) and Glasper at No. 6 (6-3, 6-2).

The loss puts the team at 10-8 overall heading into the final match of the season, a home match against Atlantic 10 Conference opponent Rhode Island. With the conference tournament just around the corner, a win would help the team maintain some highly valued momentum as the team enters post-season action.

“They have a No. 1 that’s very good,” Dixon said, referring to the familiar URI team.

“We should be able to handle them, but it’s Senior Day and there’s a lot of emotion and distraction in Senior Day. … I expect with a full lineup in there that we’ll be fine, but we have to stay healthy.”

The final match is scheduled for Saturday at 1 p.m. on the Mullins Center Tennis Courts.