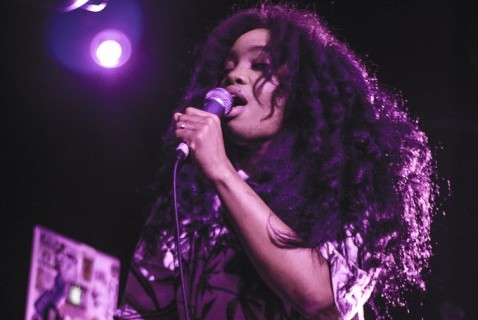 Another one of the six promised 2014 releases from the now famed TDE record label has finally dropped. SZA, the lone female and contemporary R&B artist among the likes of rap heavyweights Kendrick Lamar and ScHoolboy Q, released her third EP, “Z,” on April 8. Originally from Maplewood, N.J., the 23-year-old released two mixtapes prior to her signing with TDE. She hooked up with TDE in 2011 purely by accident, but recently she has been featured on fellow TDE member’s Isaiah Rashad and ScHoolboy Q’s debut albums, building hype for her own debut release with the label.

Her style combines minimalist R&B elements with a soulful jazzy sound, creating layered tones that accentuate her ethereal and melodic voice. She is a creative soul, taking cues from every genre and citing artists ranging from Bjork to Jay-Z as musical influences.

SZA opens “Z” with “Ur,” a track that showcases her haunting vocals over electronically produced beats. Soulful undertones appear in her soft, melodic voice, similar to that of fellow R&B up and comer, Jhené Aiko.

The “Z” tracks that feature other artists are some of the EP’s strongest, highlighting the incredible talent of both SZA and her guests. “Childs Play,” with Chance the Rapper, is a minimalistic track, with a light and steady beat that needs little behind it, mostly speaking for itself. SZA’s layered vocals smoothly segue into Chance’s verse where he delivers a different side of himself, veering away from his typically abrupt and aggressive lyrics to something more thoughtful, while keeping up his signature flow.

“Warm Winds,” featuring fellow TDE member Isaiah Rashad, has heavier, more layered beats, while SZA croons with her impassioned lyrics. This standout track samples the iconic scene from “Forrest Gump,” with SZA reciting the prayer said by Jenny, “Dear god, make me a bird so I can fly far, far away from here.” Her voice meshes perfectly with Rashad, their voices sharing the same melodic quality.

Older influences show themselves on tracks like “Julia” and “Sweet November.” Both songs share synth-inspired beats paired with a jazzy sound, transporting the listener back in time. On both tracks, her soul and jazz influences are quite obvious.

Keeping up with the older sound, “HiiiJack” channels ‘90s R&B, with heavy synths that work well with her staccato singing.

SZA teams up with Kendrick Lamar on “Babylon,” . Their voices fit together with ease, complementing the pairing of electronic beats layered over reversed vocals that continue the ethereal vibe of the album. This same sound appears again on “Green Mile,” an echoing, tension-filled track containing passionate lyrics that connect immediately with the listener.

The album finishes with two strong songs, “Shattered Ring” and “Omega.” “Shattered Ring” offers numerous powerful crescendos, with SZA’s voice showing its range on the chorus as the complex layered beat intensifies. Even then, her voice manages to stand out over the busy musical background. “Omega” serves as her closing track, where she utilizes nature inspired sounds to drive the song. Her trance-inducing voice is the main focus of the track, letting the simple beats only emphasize her talent.

As a young, new member of the R&B scene, SZA makes her statement with the support of her record label. “Z” highlights her unique skill set, one that cannot be found anywhere else within the TDE label or currently in the pop market.