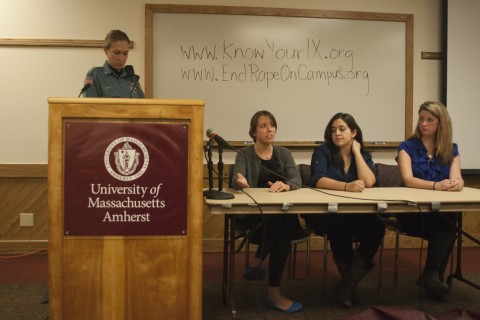 The University of Massachusetts was named one of 55 colleges and universities currently facing a Title IX investigation over the handling of sexual abuse complaints in a list released Thursday by the White House Task Force to Protect Students from Sexual Assault.

“The Task Force has done outstanding work in providing strategies to prevent sexual assault, respond compassionately to victims and hold perpetrators accountable,” said Enku Gelaye, vice chancellor for student affairs and campus life, in the press release. “We fully support their work, and we have already been actively engaged in implementing many of the best practices recommended by the Task Force. Much more must be done to safeguard our students and we are committed to that effort.”

According to a Boston.com article, the list was released two days after the White House task force promised greater government transparency on sexual assault at colleges and universities. A review of UMass has been ongoing since June 30, 2011, according to the press release, but no conclusions have been reached.

Title IX prohibits discrimination on the basis of gender at schools that receive federal funds, and regulates how those institutions handle sexual violence. According to Boston.com, the law is increasingly being used by victims who believe their schools failed to protect them in cases of sexual assault.

Aviva Luttrell can be reached at [email protected]