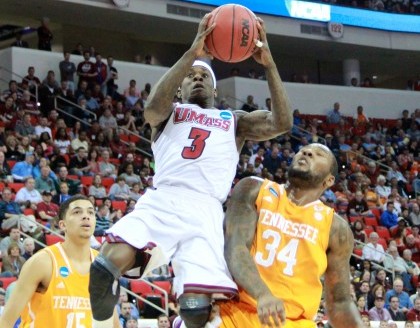 Chaz Williams’ basketball journey has taken him on a winding path, one that’s woven from Brooklyn to Hofstra to Amherst and even flirted with the National Basketball Association.

Now, the former Massachusetts men’s basketball point guard will continue his career as a professional overseas. The 23-year old signed a professional contract with a club in Turkey on Thursday.

Williams initially departed UMass with eyes on a career in the NBA, completing the pre-draft process and working out with as many as 12 teams. But he was not one of the 60 players selected in the draft and didn’t receive a contract or tryout offer to participate in the NBA’s Summer League, requiring him to at least investigate other potential options. He’s continued to workout in New York throughout the summer while biding his time.

“I’m still working, definitely,” Williams said by phone. “In the years to come I still have a dream of (making) the NBA and, God willing, everything will go right.”

When faced with his prospects, Williams knew pursuing his career overseas was always a legitimate possibility.

“It was always an option that was in my head,” Williams said. “I love basketball and at this point, I have a family to take care of. So it’s just trying to go with the best decision and the right offer.”

Williams’ pre-draft process took him on workouts with teams such as the Cleveland Cavaliers, Boston Celtics and Toronto Raptors, among others. He said he met with numerous coaches, scouts and other front office personnel along the way.

“It was wonderful,” he said. “You get to stay in the best hotels, you get treated like a professional and the workouts are how you get your chance. Every workout was from zero to intense fast and you have to be ready for it and show that everything is right and you’re ready to be there.”

“When I sat in the front office with the Cleveland Cavaliers they told me they loved me and they loved everything that I was doing and they see me being in the NBA as an NBA player,” Williams said. “There were things like that everywhere I went that were pretty great to hear and know.

“Sometimes you just have to prove yourself a little more,” he added.

As he’s trained throughout the summer, Williams set out to prove himself in the surrounding areas, often jumping into pickup games throughout the city. He said he plays mostly with other professionals and has recently played with current Charlotte Hornets and former Indiana Pacers guard Lance Stephenson.

Williams said it’s a learning experience for him as he plays with those who have proven themselves professionally. He said he’s learning how to guard various types of players as he prepares to take his game overseas and “wow a lot of people.”

“It’s tough, fun basketball,” he said. “There’s nothing like playing basketball in New York City, it’s the mecca of basketball. Being here in New York, every time a celebrity comes they just want to play.”

After his junior year at UMass, Williams considered the prospect of forgoing his final year of eligibility and signing a $150,000 professional contract with a Turkish team. But he decided against turning professional and returned to school for his senior season. Despite not improving his draft stock with the extra year in school, Williams said he “never” regretted returning to school.

“I was happy with the way things went on this year and I’m thankful and blessed and happy I got to share my senior year with the guys,” Williams said. “I felt like it was a good year for me.”

Williams led the Minutemen with 15.6 points per game and 6.9 assists. UMass returned to the NCAA Tournament for the first time in 16 years as a No. 6 seed and won 23 games before a stinging 86-67 defeat to the 11th–seeded Tennessee Volunteers in the second round. He left the program as the all-time leader in assists with 702 and scored 1,653 points.

“I felt I had a great career at UMass,” he said. “I wish I could’ve done a lot more and helped us get far in the tournament and I wish I could’ve made it our junior year. But everything that went on from when I first got there and nobody was in the stands to my last game being sold out, it was a great feeling to know you were a part of something that can be tremendous in years to come.”

Williams maintained his goal is to build a professional career in the NBA, but knows that in order to do that, he first must take advantage of his opportunity overseas.

“(I’m) staying focused and keeping the drive,” he said. “Unfortunately things didn’t go as I planned for the NBA so I’m going to have to go overseas for a year and then possibly do great there and come back next year.”