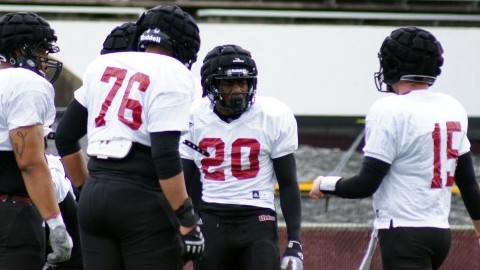 The transition period, and the grace period, for the Massachusetts football team is over.

When UMass made the jump to Division I FBS football prior to the 2012 season, most assumed that throughout the first couple years, wins and losses weren’t the basis for which to judge the development of the program.

It was a long, painful two-year turnover, but with coach Mark Whipple back at the helm, UMass’ legitimate stint in Division I starts now.

Although the first day of training camp for any football team usually doesn’t fully indicate what’s in store for the season, one thing was obvious: This team is excited to be playing football again.

However, sometimes in order to move forward in football, you have to take a step back first.

“Obviously everyone has the first day jitters,” quarterback A.J. Doyle said. “There’s a whole new staff and a whole new level of energy. It’s a lot different to be a football player at UMass than it was nine months ago. And it’s definitely a good change.”

With the new turf was installed into McGuirk Stadium and the press box renovations almost complete, the next chapter of Minutemen football is becoming more of a reality than a fantasy. But Monday, on the first day of training camp, it was as if the Minutemen traveled back into time to 1998 when Whipple won the I-AA championship.

UMass began its first full team practice of the season on Gladchuk Field, two grass fields located behind McGuirk Stadium. Whether it was dirt flying around, linemen pushing the sled, or assistant head coach Dave Sollazzo losing his mind and getting in the face of anyone and everyone, it finally felt like old-school football was back in Amherst.

And with the new season starting, there is a new group of leaders in the locker room, and that leadership was made apparent on the field from the sound of the first whistle.

Safety Joe Colton, who finished fourth on the team with 65 tackles last season, made it clear that he was not only poised for a bigger role on the football field, but as a vocal leader to the younger guys in the defensive secondary.

“I was really surprised with the young guys today, these guys have to become veterans very quickly,” he said. “This past year there has been a whole different attitude, but the first day of camp is always the same, people are just excited to be back playing football.”

Doyle, who is competing for the starting quarterback job, agreed.

“I was always used to being the youngest guy in the quarterback group but now it’s my chance to lead,” he said. “It’s my turn to teacher these guys how to be a college quarterback both on and off the field,” Doyle said.

Doyle is one of many players who will be competing for a starting job before the Minutemen’s season opener against Boston College on Aug. 30. In fact, it seems like there’s a battle for almost every position on the team this time around in camp.

Over the next three weeks or so the position battles will work themselves out and the depth chart will become clearer. Guys will stand out and some players will go down with injury.

On Monday, none of that really mattered. Monday’s practice had a bigger meaning that that. It was all about getting UMass football back to the way it should be.

“We had a great day of practice today,” Whipple said after his team had headed to the showers.

And in terms of starting the next chapter of football in Amherst, it was a great start indeed.