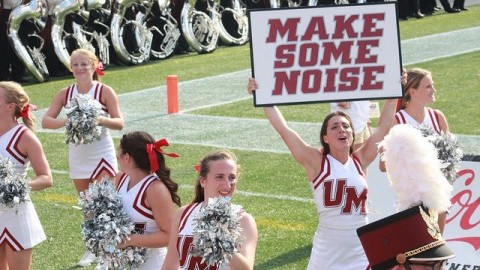 In reality, cheerleading is so much more. The cheerleaders at the University of Massachusetts are completely dedicated to the sport they have picked. To make the squad, each young woman needs to have a background in gymnastics and be personable. Most come in with either dance or gymnastics background, and usually have cheerleading experience.

Every practice starts with a couple laps around the track, followed by about 10 minutes of stretching. Then, they’ll start to practice their stunts. Up and down the mat they go, doing cartwheels and flips for half an hour or longer. After that, they work on their routines.

The squad practices the same routines every week until they have perfected them, and then they practice some more. The routines they perform at games are regulated by the Universal Cheerleaders Association — or, as senior Victorianna Casella described it, the NCAA for cheerleading. The more complex routines are for competitions.

And 5-6-7-8: A profile on UMass cheerleaders from Daily Collegian on Vimeo.

In April, the team made it to cheerleading nationals in Daytona, Florida, where they placed ninth. Recently, at the Universal Cheerleaders Association Camp in Scranton, Pennsylvania, they placed first in sideline and overall game day performance.

That said, cheerleading is not all about athletic competition. The cheerleaders function as a mix between a team and marketing force for UMass athletics. When they are not competing, they work throughout the year at fundraisers and other events as the face of UMass and the athletics department.

They perform at all home games for the football and basketball teams, plus postseason games for either team. The ability to enhance the atmosphere at various venues is a selling point for many members of the squad.

Their job is to keep the crowd active, and keep spirits up even when the score is not favorable. An added benefit to the job—in between routines, the cheerleaders sit in front row seats at all the games.

“You can’t get closer to the games than we do, you’re up close and personal and it’s really fun,” said sophomore Dana Delpha.

Despite the hours of practice, hard work and skill it takes to be a cheerleader, some people believe that cheerleading should not be a sport. Nonetheless, that doesn’t bother them.

“I think that us knowing that we are athletes and what we do is a sport is good enough,” Casella said. “We know how hard we work and the amount of time we put in for our routines, which is equal to our D1-A teams.”

“There’s no other feeling like being a (Division I) cheerleader,” Casella said.

Lauren McArdle can be reached at [email protected]