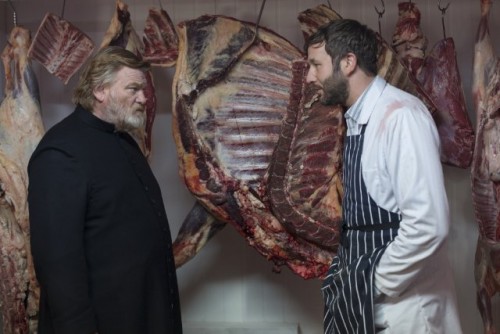 “Calvary” is two things. It is the English version of the Latin name for Golgotha, the hill Jesus Christ was crucified on, and it is a comedy whose staggeringly morbid sense of humor is braced by the hard-worn hopefulness of an aging priest. “Calvary” is the second film by John Michael McDonagh, following his debut with the dark comedy “The Guard” in 2011. Mining comedy from even bleaker circumstances than that debut, the film’s humor is a departure from its predecessor in parts and an escalation in others, but it’s also the key to a belief in the human potential for goodness that underpins the entire story.

“Calvary” follows Father James Lavelle, the Catholic priest in a small Irish coastal parish, played by McDonagh’s collaborator in “The Guard,” Brendan Gleeson (“In Bruges”; “Edge of Tomorrow”). One Sunday, during confession, a parishioner tells Gleeson that he will kill him as revenge against the Catholic Church for molestation he suffered at the hands of a different priest decades ago. He gives Father James a week’s time to set his personal business in order. It’s nothing personal, the parishioner explains; it’s simply that killing a good priest will generate more shock and attention than killing a bad one. That week forms the arc of the film, as Father James faces one last succession of crises from his congregation with care, sincerity and wry humor.

The tension between the concept of goodness and the struggle to live according to it encapsulates the entire film. As village priest, Father James at once commands respect from the village and serves as the focus of intensely resentful disillusionment with the Catholic Church that he represents. In his personal life, Father James is a recovering alcoholic and grapples with guilt as he attempts to reconcile with his adult daughter Fiona (Kelly Reilly, “Sherlock Holmes”; ABC’s “Black Box”), born before he joined the priesthood and estranged after the death of her mother.

The value of faith is an issue that dominates the film. One quiet, wrenching scene takes place in a hospital, as Father James administers last rites to the dying husband of a stranded tourist (Marie-Josée Croze, “The Diving Bell and the Butterfly”; “Munich”). As he subsequently prays with her in the hospital’s chapel, they discuss the nature of faith. The tourist wonders how it could be so easy for some people to lose their faith. Father James offers that perhaps, for them, faith is only the fear of death.

On his way out, Father James encounters another challenge to the meaningfulness of his work in a brilliant but pessimistic exchange with Aiden Gillen (HBO’s “Game of Thrones” and “The Wire”) as Frank Harte, an atheistic doctor who loves to cajole the priest about his faith. Wondering out loud about the limits of the role he plays versus the one Father James does, Harte admits that he’s beginning to feel a little clichéd playing from the same repertoire of cynical observations. “The material’s getting a bit stale,” Father James agrees.

In Calvary, however, everyone’s material is getting stale. The knowledge of his impending demise throws things into a new light for Father James, but little looks different. Confronted with issues such as a young parishioner (Killian Scott) debating joining the army as an outlet for his escalating romantic frustration, an elderly writer (M. Emmet Walsh, “Blade Runner”; “Blood Simple”) openly discussing the pros and cons of ending his life before he grows infirm and senile and an unbearably obnoxious financial speculator (Dylan Moran) seeking to ease his conscience by donating to the church, Father James responds to their dramatics with wry, pretension-deflating humor and a genuine effort to help them. Each encounter, however, leaves him a little more worried about the limits of his ability to do good.

Despite the barrage of doubt, contempt and tragedy, Father James’s belief in goodness is what sustains him, and ultimately, the film. In a conversation with his daughter Fiona on a walk along the coast, he expresses to her the belief that sin is focused on too often, and that virtue is neglected. Confronted head-on with the former, Father James’s choice is to search for the latter, even where there may not be any.

As he says, “Forgiveness has been highly underrated.”