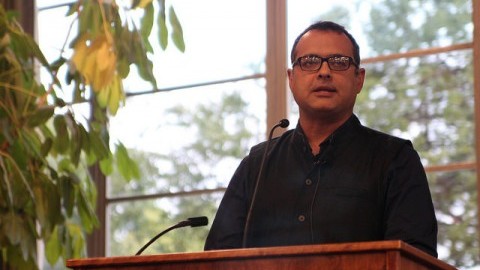 Dr. Vijay Prashad called for a revolution on Wednesday night at his lecture titled “Letter to a Wound: The World We Live in Today.”

Sponsored by the Social Thought in Political Economy program, the talk confronted what Prashad believes is the root of the world’s woes, namely, capitalism. The lecture was part of a yearlong series put on by the University of Massachusetts’ College of Social and Behavioral Sciences called “Social Science Matters: Perspectives on Inequality.”

Staying true to the theme, Prashad’s talk centered on global inequality and the repercussions it has had in recent history. His realism clashed with his optimism as he preached to the crowd the dire need for change, his commitment to change and the difficulty of starting a movement in this day and age.
A sad truth in the era of technology is that even though ideas can spread like wildfire, the tools of repression are just as far-reaching.

Prashad encouraged students to take a step back from their academics, turn away from grades and simply read books and talk about their own ideas. Independent learning inspires and without it, education accomplishes nothing.

During a question and answer session after the lecture, an audience member stood up and spoke directly to the students in the room, asking why they have yet to protest the debt crisis. He said the entire student population would gather to protest the apartheid in the 1980s. He wondered why we haven’t mobilized for a cause even closer to us. Prashad sought an answer.

“You are deluded into thinking it is easy to get a job,” he said. “Our time is so spent trying to build resumes that we don’t build societies.”

A traditional Marxist, Prashad said he believes that the pursuit of private capital and a repressive ruling class are the agents of global inequality, but recognizes his ideas are far from mainstream.
“The ideas of our time are the ideas of the ruling class” he said, later adding, “I’m surprised no one has attacked me for talking about Marxism yet, what kind of college is this?”

What Prashad did not realize was that the facilitator of the event, the STPEC department, was declared a “Marxist” major back in the 1970s and nearly everyone in the audience felt just as he did. His ideas were powerful, revolutionary some could say, but he was preaching to the choir. During the final Q&A session, nothing Prashad had said was challenged.

It was impossible to leave the lecture without feeling empowered. The dire need for change is everywhere and only growing worse each day. Even if you had disagreed with everything Prashad had to say, even if you believe capitalism is an untouchable institution, there is no denying the need for global change.

In his closing remarks, Prashad called for a revolution.

“Change does not come from ideas alone, it comes from the combined action of the vast mass of people against the few who have monopoly over power, privilege, and property,” he said.