“Happy Idiot” marks return of TV on the Radio 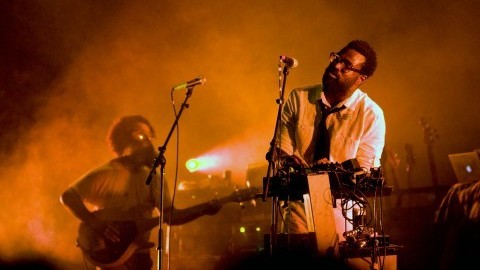 The Brooklyn-based rock band, TV on the Radio, has been largely silent since 2011 when it experienced both triumph and tragedy.

The band released its fourth studio album, “Nine Types of Light,” but nine days later, bassist Gerard Smith lost his battle with lung cancer and died at the age of 36.

Its members have kept busy since. Guitarist and keyboardist Dave Sitek continued his work as a record producer, working with the likes of

However, there was an absence of collaborative activity among members of TV on the Radio until last summer, when the band released two singles titled “Mercy” and “Million Miles.”

Neither of these tracks, upon being released, were indicated as belonging to any sort of larger collection of new material. However, the band announced in November 2013 that it was at work on a new album. Then, in June, TV on the Radio played three new tracks at BottleRock Music Festival in Napa Valley, California.

The name of the band’s latest album, “Seeds,” was released in July. A definite album release date of Nov. 18 came later with the release of “Happy Idiot” on Sept. 2.

As the single for band’s first album since 2011, “Happy Idiot” is an engrossing, energetic song that is reminiscent of TV on the Radio’s previous work. However, it does not sacrifice the possibility of another rewarding change in direction for the band.

Adebimpe’s charismatic vocals and a fast, kinetic rhythm guided by Sitek’s production (the album was produced at Sitek’s studio, Federal Prism) provide the backbone for a rewarding track about deliberate ignorance for the sake of emotional peace.

“Happy Idiot” heralds the return of a band that is one of the most creative and fun in contemporary music. With a title evoking growth, transformation and new life, we can all look forward to an album that takes TV on the Radio’s musical poetry and potent melodies in a new direction.