How I met the alternate ending (and loved it) 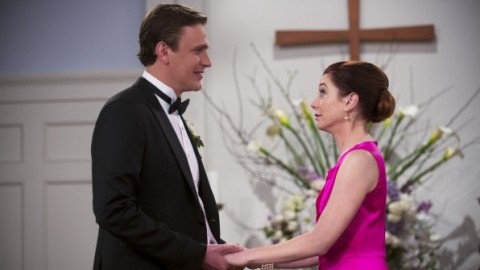 Ah, a world in which Ted Mosby (Josh Radnor) meets the mother (Cristin Milioti), and all is as it should be. In other words, the “How I Met Your Mother” alternate series finale was leaked online Saturday, and it was everything the real finale should have been.

In the show’s official ending, which left many fans with a bitter taste in their mouths, Tracy McConnell, the mother, meets a dark fate (which, frankly, I’m still too hurt to talk about), Barney’s (Neil Patrick Harris) and Robin’s (Cobie Smulders) relationship declines and Ted, once done with his nine-year-long story, runs back to his dear old Robin.

But this new ending comes to a much sweeter conclusion.

In the alternate ending, a nifty new voiceover from Ted suggests Barney and Robin repair their marriage and he and Tracy go on to live the happiest of endings. As in the aired ending, Ted and Tracy marry, but this time, Ted takes the audience back to the beginning as he recounts the “easy” road he traveled in the last nine years during his search for his wife. It’s a nostalgic retelling of the last nine years we’ve spent with Ted, and it ends full circle with Ted and Tracy’s meeting at the train station. It would have been perfect had it been the true ending.

It includes no new footage, however. Back when the series finale first aired show co-creator Carter Bays tweeted, “We only shot one script, but through edit room magic we had two possible outcomes for the series.”

In fairness, the alternate ending is somewhat vague, with no flash forward to future Ted, his wife and his kids, but it’s a lot happier and undoubtedly a much better close to the long-running show. Most certainly it’s the ending every disgruntled fan asked for.

The series creators have yet to confirm this ending was in fact their alternate. Given Ted’s brand new speech, however, it seems this is indeed the promised finale included in the DVD box set titled “How I Met Your Mother: The Whole Story.” The box set featuring all nine seasons is set to be released Sept. 23.

The video, initially released on YouTube, has since then been deleted. But multiple users have both re-uploaded it to YouTube and posted it on Vimeo. Many comments rave about how wonderful this ending is, but like me, some are simply angry it wasn’t the chosen one.

One can only wonder why the show’s creators let this ending take a backseat.

Granted, this ending sounds almost too perfect to be real, but it wouldn’t have been unrealistic. After all, this is television, and after nine years rooting for a man who traversed through life’s difficult twists and turns in search for his soul mate, it was the ending we were expecting.

For a show that made us wait that long to see Ted and Tracy meet, it only would have been fitting to end with the couple’s charming meeting, huddled under their yellow umbrella, hiding from the rain. No sudden, uncalled-for death. No pulling the rug out from under our feet. No broken relationships. No erasing character development. No resorting (again) to Aunt Robin in times of loneliness. Just a perfect couple who spent too many years looking for each other, often missing each other by mere seconds, finally, finally meeting.

Had that alternate ending been the true series finale, that kids, would have been legen–wait for it –dary.