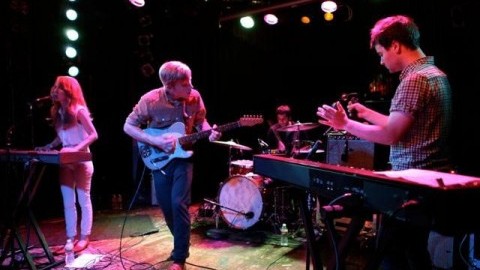 Having just released their third album, “Ritual in Repeat,” Sept. 9, husband and wife Alaina Moore and Patrick Riley will grace the stage as the indie duo Tennis this Saturday at the Pearl Street Nightclub in Northampton.

In its newest album, Tennis shows improvement and experience as it continues to master and settle into its sound, resolving more and more of the flaws that the duo used to be criticized for.

Its sound is both spacious and groovy, complete with elements of a modern electronic sound. Tennis’ indie pop music always creates a perfect balance between catchy and soothing.

The story of how the band came together is a very unique one. Moore and Riley met in college in Colorado and quickly became close. Selling all of their possessions, the two went on a sailing trip along the Eastern Seaboard in a small boat they had bought. Neither had any intention of writing songs or even making music together at the beginning. However, during that trip, the couple became inspired by their epic adventure. After they returned from their journey, the two wrote and recorded their first album, “Cape Dory,” which was released in January 2011.

“Cape Dory,” much like the couple’s voyage, feels oceanic. Musically and lyrically, one can easily feel like they are embarking on that very same journey alongside Moore and Riley. The album is simple, fun and catchy. It maintains consistency throughout its 10 tracks and carries a sound reminiscent of the past. Whether on a beach in July or at home in the middle of February, “Cape Dory” evokes feelings of relaxation and warmth.

Critically, “Cape Dory” received mixed reviews. The couple was applauded for their independence in creating the album but scrutinized for the record’s overly simplistic nature. Reviewers also noted that there was a lack of depth or complexity in both the lyrics and the sound. However, Moore and Riley did not let these criticisms hurt them, but rather learned from them moving forward.

Just 13 months after “Cape Dory” was released, the couple came out with its second album, “Young and Old,” which set about correcting many of the flaws that “Cape Dory” was criticized for. This was due in part to stout production from Patrick Carney of The Black Keys.

A much stronger and more put together album, “Young and Old” showed Tennis taking on a new, more developed direction. The second album carries a much heavier and solid quality while still remaining sufficiently mellow, thanks to Moore’s soft vocals.

Soon after “Young and Old” was released, the group began to receive more recognition, with its songs appearing on television shows such as “Once Upon a Time” and “Grey’s Anatomy.” Especially popular in the indie rock community was their single, “Origins.” Carrying the duo’s nostalgic beat with new producers, catchy percussion vocals, overlaying tone of the alto saxophone and fun plucky guitar picking, there is little about the song that would not captivate an audience.

Upon this newfound success, Tennis toured across the United States and Canada in 2012 and 2013, releasing the EP “Small Sound” in November 2013. “Small Sound” was released by the band’s new label, Communion, rather than Fat Possum, which released the band’s first two albums.

For a diverse sound, relaxing music and a last glimpse of summer before winter comes along, Tennis is the group to see. Tickets for Saturday’s show are available for $12.50 in advance, $15.00 at the door.