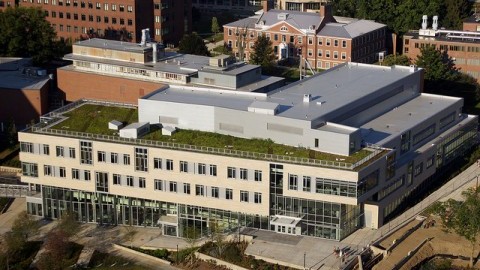 The Integrated Learning Center will open for classes this fall (Cade Belisle/Daily Collegian).

Construction on the Integrative Learning Center at the University of Massachusetts has been completed in time for the fall 2014 semester, much to the excitement of professors and students alike.

The ILC is located on North Pleasant Street next to Hasbrouck Laboratory, in close proximity to the Student Union and Lincoln Campus Center at the north end of the campus pond. Construction on the $93 million building began in March 2012 and was completed in August. It is the new home of the communication, journalism, linguistics and film studies departments, according to the UMass website.

The 173,000 square foot building boasts more than 60 rooms and 2,000 seats of state-of-the-art classroom space, according to the website. These classrooms come equipped with audiovisual devices and new educational technologies, including five team-based learning rooms designed to foster interaction among students and between students and faculty. The ILC also has studios and specialized television broadcasting and production rooms, computer classrooms, and speech perception and auditory phonetic labs.

Journalism professor B.J. Roche, who is settling into her new space in the ILC, said she isn’t looking back at her days in Bartlett Hall.

“I’m looking forward to having heat,” she said in a recent interview. “I’m going from an office with erratic heat. Every student who has ever had a meeting in my office knew the radiator was so bad that we often had to go to another room. Bartlett really had some problems as far as comfort and usability.”

Roche said she is looking forward to the new atmosphere of the ILC this semester, where she will be teaching in one of the multimedia labs.

“We’re going to have some terrific space around the department for students to work, which I’m excited about. It’s nice and clean and everyone is really knocked out by it. When I was walking up to it I started to cry – they did such a great job and it’s a great space.”

With the ILC’s new broadcasting studio, the University will now be able to offer three to four courses in broadcast journalism this semester, up from just one offered last spring, according to Spire.

“It’s a thrilling time to be a journalism major,” Roche said. “I’m not going to miss Bartlett. I think this new space will have an interesting energy and projects coming about because everyone will be in the same orbit. We’ll be creating some great memories over there very quickly.”

“I am ecstatic about being in the ILC,” he said. “In the 24 years that I’ve been here, the Linguistics Department has been crammed into woefully inadequate, insufficient and decrepit space in South College. A number of our laboratories were in the basement of Bartlett, and the Center for the Study of African American Language was in Arnold House. Now, we at last have space for all our faculty and graduate students, for visitors and for undergraduates.

Linguistics professor Rajesh Bhatt said, “I am very excited for the new building – its design and nice views. Our department used to be scattered across many buildings and I am happy that we will now be in the same space. The students also have larger offices and I’m looking forward to impromptu meetings and discussions.”

The building is designed to be one of the lowest energy consuming buildings on campus, with a target Leadership in Energy and Environmental Design (LEED) rating of gold, according to the UMass website.

A large expanse of the roof of the ILC is available for planting native pants, which will reduce the heat island effect, absorb harmful carbon dioxide, reduce glare, protect the roof from UV light and the elements and retain storm water.

The ILC has many other sustainable features, including reduced energy usage with natural ventilation, water conservation and re-use and reduced waste.

Nicole Dotzenrod can be reached at [email protected]