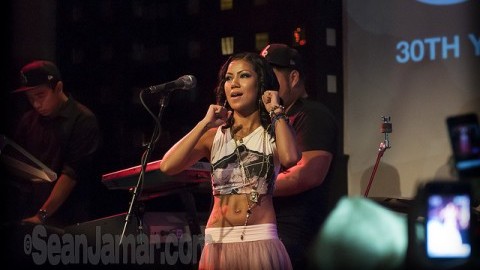 Rhythm and blues singer Jhené Aiko has returned this year with the Sept. 9 release of her latest album, “Souled Out.” The album, creatively titled with a play on words, shows a clear idea of Aiko’s aspirations as an artist.

Her calculated production goes right down to choice of release date, as the ninth was the last super moon of the season. Aiko told her fans on Instagram, “It falls in Pisces Decan 2…The positive manifestation of this moon will be those who are sensitive to its powerful force will have the superb ability to redeem themselves and help others to do so.”

Aiko often shares her spiritual beliefs in interviews and in her music, exposing her emotional core to her listeners.

On “Souled Out,” Aiko continues her contemporary R&B sound with a few new tricks. With hardly any guest features, this album highlights her skills as a budding artist, proving she knows her way around the studio and does not need the help of heavyweights to carry her.

The first couple of tracks on the album are “Limbo Limbo Limbo” and “W.A.Y.S.” Aiko she stays true to her handmade sound in these songs, which feature ethereal synths and heavy bass that complement her angelic voice.

Aiko keeps up with her simplistic beats and layered bass with crescendoing synths to create a sound of both darkness and lightness, as heard in tracks such as “To Love and Die,” featuring Cocaine 80s, and “Wading.” Her rap alter ego, J Hennessy, makes a quick appearance on “To Live and Die,” showing that her rap skills are very much on par with her vocal range.

“Spotless Mind” and “Eternal Sunshine” have both become fan favorites, with soft, whimsical base beats that allow Aiko’s voice to take center stage. With a hint of flickering film sound effects, it is the small details that show how involved Aiko is with production.

Aiko’s poignant lyrics and understated rhythms come together on a track produced by Childish Gambino called “The Pressure.” On the album’s lead single, Aiko comes through with her well-known style, characterized by a few layered beats and her clear, isolated voice ringing in the listeners’ ears. The track encompasses Aiko’s style and musical personality—simple yet full of deep-rooted meaning.

“It’s Cool” and “Brave” both enter new territory, as Aiko tries out different influences to create 1920s jazz-inspired tracks that work in favor of her smooth voice and quick-witted lyrics. She fits well into the new sound, but it is clear that her comfort zone lies in more crooning ballads.

The most emotionally charged song on the album is the touchingly named “Promises,” featuring Aiko’s 4-year-old daughter and a clip of her late brother. The message is pure and heartfelt, taking notes from Beyoncé’s track, “Blue.” The song serves as an open letter of hope and love to her daughter and brother, pulling hard at the listener’s heartstrings.

Hip-hop artist Common also makes an appearance on “Souled Out” on the track “Pretty Bird (Freestyle).”

If anything, “Souled Out” is proof that Aiko is still growing and learning as an artist and is sharing her story as she progresses. Full of creative word play and insight into love and love lost, the self-penned, emotional lyrics strike a chord with listeners. Aiko has what many mainstream artists lack—a sense of self and direction.

As the music industry maintains a never-ending sense of chaos, Aiko’s album is a safe haven. She is one of the few artists that continue to hold her own, both musically and spiritually—a trait that is evident on “Souled Out.”