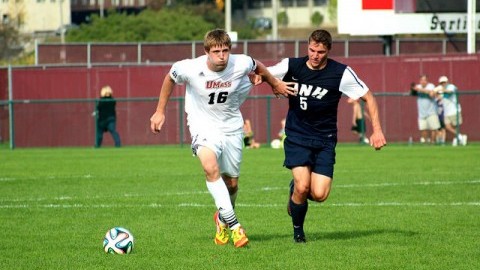 The official temperature read 81 degrees at the start of Sunday’s 2 p.m. matchup between the Massachusetts men’s soccer team and New Hampshire as an intense sun shined down on Rudd Field.

Standing at the backline for the Minutemen for all 90 minutes in the heat of Sunday’s matchup was a defensive pair familiar with staying on the field: senior Matt Keys and sophomore Matt Pease.

Keys has now played a full game in six straight matches, including two overtime games, while Pease notched his fourth complete game of the season. According to Keys, this workload has allowed Pease and him to develop chemistry at the two center back positions.

“We work really well together. It’s a good relationship and a good partnership,” Keys said. “We’re comfortable playing together, which helps the attack do their job.”

Pease said that his relationship with the more experienced Keys has helped his own development as both a defender and as a leader.

“Keys is a great leader, so I have been taking after him,” Pease said. “He’s going to be graduating next year so a lot of the leadership roles are going to be up for grabs and I look to do my part.”

This chemistry has also allowed Keys, an offensive threat, to regularly help out on attack as a forward, where he has already contributed one goal so far this season. In this situation, Keys said that he can trust Pease to man the backline, where he would be left as the final defense before the goalkeeper.

“It’s good that he’s back there because it allows me that leeway in crucial situations,” Keys said. “He’s trustworthy back there.”

With the consistently high minutes of play together between Keys and Pease, the UMass defensive unit as a whole has also continued to see improvement.

After conceding nine goals in its first two games, UMass has limited its opponents to 10 scores in the six games since.

This success continued in Sunday’s 1-0 loss to New Hampshire at Rudd Field. Despite the final outcome, the Minutemen held the Wildcats to four shots on goal in a very even-matched game.

“We were tracking the runners well and winning a lot of the early 50-50 balls, so we did well for the most part,” Keys said. “If you look at the amount of goals that we’ve given up at the beginning of the season compared to where we are now, it’s definitely a step forward.”

The game’s lone goal came with 40 seconds left in the first half. Duff Thomson corralled the ball off of a pass from Will Rasid in the goal box for a one-timer past UMass goalkeeper Ryan Buckingham.

“Giving away that type of goal at the end of the half was just killer to us,” Pease said. “It really brought us down.”

Keys said that instances such as Sunday’s “one minute of breakdown” must be eliminated in order for the Minutemen to take the next step as a defensive unit.

Pease added that the defense can’t let plays like the goal on Sunday or letdowns such as Sunday’s shutout or Friday’s overtime loss to Harvard lead to lingering negative thoughts in upcoming Atlantic 10 play.

“We’ve been giving our all,” Pease said. “It’s real tough to come back after losing one-goal games or losing in overtime, but A-10’s are just around the corner and we have to stay positive.”