Millennials’ votes can make a difference in all elections 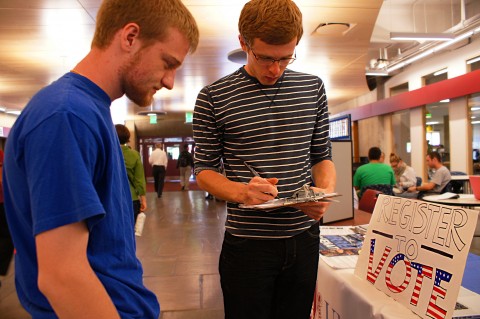 Most of us fall into the Millennial category. We make up one-fourth of America’s voting population; an incredibly compelling reason for us to vote. However, during the 2012 elections, less than half – about 45 percent – of those between the ages of 18 and 29 voted.

This is unsurprising considering Millennials’ attitude towards Washington. A Harvard IOP study, “Survey of Young Americans’ Attitudes Toward Politics and Public Service” cited in “The Atlantic” article, “The Outsiders: How Can Millennials Change Washington If They Hate It?” found that one third of Millennials believe that “political involvement rarely has tangible results.” Fifty-six percent believe that elected officials don’t share their priorities, that about three in five believe that elected officials are selfishly motivated and half believe that “politics has become too partisan.” With these cynical outlooks, our low voter turnout rate is nearly expected.

Ironically, we can begin to change this attitude by voting. The sheer number of the Millennial voting population can produce tangible results if we all actually voted. We believe that elected officials do not share our priorities, but we are the ones who elect them into office. Mark your calendars. This Nov. 4, the midterm elections will take place. Sen. Ed Markey is up for reelection, while Gov. Deval Patrick announced that he will not be running for reelection. This is a chance to produce the tangible results we fail to see.

We believe that politics have become too partisan and perceive both sides unfavorably. As a result, 50 percent of Millennials who have registered to vote register as independents or not with any political party. So if you find yourself foregoing elections because you cannot choose a side, registering as an independent is always an option.

Though we reject partisan politics with half of us as registered independents, most Millennials hold views that are more liberal when it comes to social issues. We are overwhelmingly in favor of government involvement in making college more affordable, creating more jobs, helping the poor, providing retirement security for seniors, the economy, the environment, protecting the rights of women and minorities, addressing climate change and protecting consumers and workers. We are also in favor of legalizing same-sex marriage, raising the minimum wage and gun control.

What does all this mean? For the short run, we can be the deciding factor during the 2014 midterm elections. In 2008, we flooded the polls with 66 percent voting for Obama in hopes of a discernible change. Reality fell short of our hopes and in 2012, as 60 percent of us voted for him. A predicted 53 percent of us will vote Democratic in the upcoming election. These past years have doused our confidence in the political system, but we fail to realize how significant our votes can be.

Others have already recognized the weight of our votes in the upcoming midterm. A Project New America article, “POLL: Millennials will Decide 2014 Elections… If They Vote,” assesses, “. . .if progressives have any hope of stopping conservatives in 2014, they must engage, inspire, and turn out more Millennial voters.”

In the long run, consistent voting by the Millennials could lead to an end in partisanship in Congress. Political parties aside, the general trend in the Millennial generation to lean toward progressive values could indicate greater cooperation between individuals, even of different parties. Studies on our generation consistently find that we are an idealistic generation determined to make a positive change. We can begin by changing Congress to reflect the people they represent.