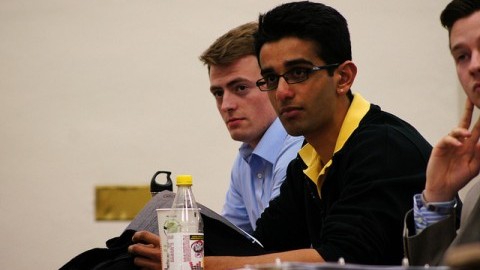 The two began working with Student Legal Services over the summer to develop ways to raise awareness among students of their legal rights.

“We were able to secure a pamphlet with legal information for students to every single dorm on campus,” Rao said. In addition to the pamphlets, which will be distributed throughout the University’s 52 dorm buildings, Rao said the SGA is working to promote the Know Your Rights Campaign.

The campaign, according to Rao, aims to educate students on their legal rights, and what to do if they need help. Currently, an attorney visits dorms, classes and clubs to talk about the rights and services the University offers.

With regards to the 383 RSOs on campus, Schissel said the SGA wants to “tighten down on the way funding is handled.” This includes sorting RSOs into certain classifications, and allocating funding from there.

In the past, according to Rao, there was a subcommittee of 10 people responsible for handling RSO budgets. However, he felt that having such a relatively small group managing a large amount of money was too stressful. By classifying RSOs into groups, Rao said, the head of the council for each classification (ex. head of the club sports council) would come to an agreement as to how much money the group needs. This way, he added, the SGA would have the final say over the budget, but there wouldn’t be as much pressure put on such a small group of people.

Although Rao said this idea has not been finalized, a test run within the club sports teams was considered successful.

Rao and Schissel also hope to broaden Career Services for students who are not in the Isenberg School of Management or the College of Engineering, who Rao said already have career services specific to their needs.

Both noted that part of the problem is many students are not aware of Goodell and the career services offered there.

Rao’s goal, he said, is to establish career services for each college. He noted that this cannot be achieved within a single year, but he hopes to acquire state funding for the project in the future.

In addition to these objectives, Rao and Schissel have a few other goals in mind.

Schissel noted he hopes to increase awareness among students of how SGA works and broaden how the University treats diversity. Rao said that although this year’s incoming class is considered the most prestigious that has ever been accepted, he believes there should be a balance between prestige and diversity when accepting students. Diversity isn’t limited to only race, he said. It also includes culture, background, socioeconomic class and more.

“This is the flagship campus of UMass, and the education should be accessible to all,” Rao said.

The pair also aims to raise awareness of how sexual assault should be handled on campus.

“It’s important to know it can be prevented by being an active bystander,” Rao said.

Rao also mentioned that Ellie Miske, a political science and women, gender and sexuality studies major, will be working with this year’s new SGA board to educate students about what is important with regards to sexual assault, despite societal norms on campus. Rao added that the SGA is in the process of bringing a speaker to campus to talk to students about how to be an active bystander.

“I’m excited to be working with an amazing team this year,” Rao said, adding, “It is the work we put together as a team that will make the impact.”