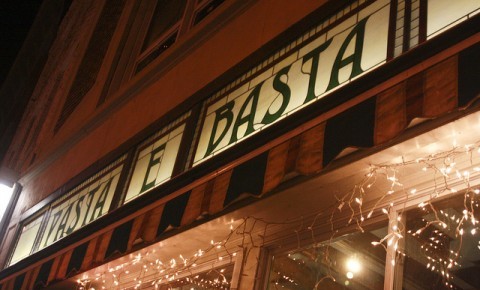 Growing up in Rome, Luciano Matarazzo learned the family art of pizza making when he was only 15 years old. When he immigrated to the United States at the age of 20, he brought his family’s culinary traditions with him in hopes of opening his own restaurant and offering authentic Italian cuisine at a reasonable price.

Matarazzo discovered his dream of opening several pizzerias throughout Massachusetts. Since then, he has owned businesses in Boston and Northampton, including Pinocchio Pizzeria on 122 Main St. in Northampton and  a small restaurant at 26 Main St. in Amherst named Pasta E Basta, which was founded in 1996.  Pasta E Basta offers a southern Italian theme, which Matarazzo said draws from his family’s roots in Rome and Naples.

Originally, the eatery had only four full-time employees and enough room to seat 35 customers. Since then, the business has both grown and come under new ownership. Luciano passed the business on to his only son, Marco Matarazzo, in 1999.  Marco then renovated the building in 2004 and expanded the restaurant to the additional upper floors.

The renovation transformed Pasta E Basta into the eatery it is today. There are three floors of seating, a trait that makes the restaurant physically unique, explained Matarazzo. Altogether, the restaurant has the capacity to accommodate 120 customers and is now staffed by approximately 10 full-time employees.

Although nearby Bertucci’s also offers Italian cuisine, Matarazzo said that Pasta E Basta is unique because it is “probably the only Italian restaurant around here that’s not chain.” He explained that because the business is individually owned, it can offer a larger variety. Pasta E Basta customers can choose between 15 different sauces and 15 different pastas.  Matarazzo pointed out that customers also have the option to mix and match ingredients to create unique dishes, something that most chain restaurants do not offer.

According to Matarazzo, Pasta E Basta serves three particularly popular entrées. There is the well-known Crazy Alfredo, which consists of fettuccini pasta covered with a spicy alfredo sauce, chicken, sausage, salami and roasted red peppers.  There is also the Frutti Di Mare, a dish of linguini pasta in white wine or marina sauce topped with clams, mussels, shrimp and calamari. The third is a combination of penne pasta, vodka sauce and sautéed chicken.

Due to its proximity to local colleges and the restaurant’s acceptance of UCards and Off Campus Meal Plan (OCMP) swipes, Pasta E Basta’s customer base is significantly rooted in its popularity among students. Matarazzo estimated that during academic semester, college students represent approximately half of his business. One of these students is Olivia Branton, a University of Massachusetts sophomore, who studies vocal performance.

Branton, who had never been to Pasta E Basta before Monday afternoon, said she decided to eat there because a friend recommended the restaurant and because she likes Italian food. After sampling her gnocchi pasta dish, she commented that the food was very good and that the restaurant offers a “very big portion size, which is never a bad thing.”

Wilson, a junior economics major at Amherst College, said that Pasta E Basta was the first restaurant that he and his family went to after they arrived from Arizona and had moved him into school. Now, Wilson lives in an apartment that is just a short walk from the restaurant, a walk that he makes on a daily basis.

“Usually, I get at least one meal here every day,” Wilson said as he ate his dish of grilled salmon, salad with balsamic vinaigrette and mixed vegetables. He described the restaurant as offering “phenomenal” food that is reasonably priced. He also complimented the service, saying that it takes “no time at all” to receive his order.

When asked why he goes to Pasta E Basta so frequently as opposed to other restaurants, Wilson said, “It’s the most consistent restaurant in Amherst, hands down… I’ve never had a bad meal here.”

Matarazzo views returning customers like Wilson as a sign that his business is offering a satisfactory dining experience.

“It’s always a pleasure to see regulars come in,” Matarazzo said. “New faces are good too, but you know you’re doing something right when the same people keep coming back.”