Recovering from anorexia on a health-obsessed campus 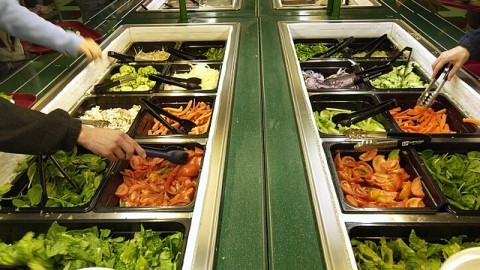 Around this time last year, I was a newly moved-in freshman at UMass, both excited and apprehensive about being on my own in a brand new – and huge – place. I had happily chosen a school that happened to be ranked No. 9 on greatist.com’s “Healthiest Colleges” list, situated in a dorm building right near the three-story Recreation Center that boasted its healthy living programs as well as dozens of fitness classes. Hampshire Dining Commons was just a short walk away, and with small labels on each dish detailing the calorie, fat, protein, sodium and carbohydrate content, I could certainly know what I was choosing to put in my body.

The problem was that this borderline-obsessive devotion to health I was finding myself surrounded by was the very thing that had once led me into the eating disorder I was trying to recover from.

Seven months into recovery from anorexia nervosa, I was not the only one who saw the potential danger in moving away from a comforting home, supportive family and friends to an entirely new location where I would begin as another new face living independently among students who didn’t know my past.

I recall my therapist at the time describing the situation like that of a recovering alcoholic taking up a bed in the local bar. The temptation to relapse was evident from day one. After all, I could be certain nobody was monitoring my behaviors – if anything, UMass seemed to be providing the very tools I needed to fuel an all-consuming focus on health.

In the first few weeks of college, I saw no hint of information about the Center for Counseling and Psychological Health on campus. Not a single teacher, student or administration member addressed the potential mental strain incoming freshmen especially may be having when moving to a new place.

Instead, this monster inside of me that I had once been so fervently trying to fight leered at the stickers on every vending machine that read “Calories count: think before you choose,” and I found no barrier to stop myself from slipping backwards into its grip with each trip to the Rec Center and each lap around the buffet circle at Hamp wondering what combination of calories from those little cards I could possibly allow myself to eat or whether I should just send my spotless plate to the dish return and walk out.

I had come too far in my recovery effort to ignore the damage I was doing to myself for long, though. Wobbling back onto my feet without any real hand to steady myself felt nearly impossible at first. UMass did not make it easy to ask for help.

When I worked up the courage to accept that I couldn’t recover alone and made a call to set up an appointment with the nutritionist at University Health Services, I was immediately put on hold. I sat trembling from head to toe for nearly 20 minutes as I waited, all the while trying to ignore the thoughts that I should just hang up, that I was making a mistake and this was a sign.

When I finally found where CCPH was located and came to the office, my eyes lit up upon a poster about group therapy sessions for eating disorder recovery. Yet, when I called the office later for more information, I was told the group would not be running in the fall because not enough people had shown interest.

I thought to myself, “If it is said that 1 in 5 women suffer from an eating disorder, and I am on a campus of more than 27,000 students, how is it possible that there weren’t enough people seeking recovery to form this group?”

The reason is a sad truth: Universities such as UMass and the majority of its students still remain largely ignorant to the other world of improper eating. The fight against the obesity epidemic has become so well-known, and yet so often misguided, that our generation is constantly bombarded with messages to just cut calories and focus on exercise.

This, combined with the impossible beauty standards our society upholds, creates an environment where healthy eating and exercise is praised even when it is escalating into levels of obsession. Fat-shaming becomes a tactic against obesity rates that instills a fear of weight gain in individuals that may be already at a healthy set-point, and normalizes self-loathing as a motivation for weight loss.

As a new friend sitting with me at the dining hall grimaced at the remnants of her slice of chocolate cake and declared she was “disgusting” for having it, I silently congratulated myself on completing a full dinner and daydreamed of the day I’d feel comfortable eating chocolate cake. I received compliments over having the “awesome dedication” to exhaust myself at the gym once, sometimes twice, a day every day, and silently begged for someone to tell me instead to slow down, to ask me if I was okay.

Yet nobody could have known, all influences of our “health”-obsessed environment blindsiding what little education most people have on eating disorders. My illness and recovery were kept hidden, swept under the rug along with hundreds of other women who would much sooner be judged as arrogant for admiring their own looks than abnormal for hating them.

If the topic had been as socially acceptable to talk about and as prominently displayed as the fitness-promoting and calorie-count signs around campus, then I would have been able to see I was not alone and that recovery was still worth it long before I began speaking about my struggle at the end of my first semester.

For now, though, maybe that is our biggest weapon against eating disorders: speaking about it. If UMass is trying to promote healthy living for its students, it needs to ensure it is hearing all voices – not just physically unhealthy and overweight individuals, but mentally unhealthy individuals and those struggling with eating disorders as well. Strict dieting and over-exercising must not be normalized to support an illusion of health and fitness, and compulsive overeating (binge eating disorder) must not be dismissed as a shameful lack of self-control.

I know this now and I make sure my friends on campus know it. My voice is only one, but in fighting against an illness that affects over 30 million people in this country, I know it is not a cause I stand alone in. It simply needs more acknowledgement, more education and more acceptance in the struggle of recovery.

Kate Leddy is a Collegian columnist. She can be reached at [email protected]