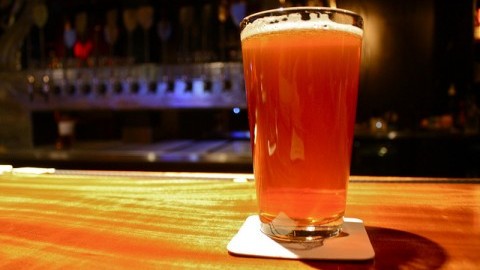 To mark the forthcoming of fall and to celebrate the amazing beers released during Oktoberfest, I present a well-curated cast of ales put together with the help of a store clerk at Russell’s Liquors in downtown Amherst. I renounced the standard Shipyard Pumpkin that plagues store shelves this time of year, and there will be no cinnamon-rimmed absurdity here; just simple beer-to-glass, glass-to-mouth review. Here are some of the brews tapped into play just in time for the leaves to change.

The Massachusetts-brewed Jack’s Abby Copper Legend is endearingly named in honor of the plumber at the brewery. Who wouldn’t love a drink with a sentiment like that? It pours a clear, bright amber with visible carbonation seeping to the top of the glass, forming a dissipating head of off white. The nose is pretty sharp, with outright earthy notes and a malty, caramel aroma. It’s apparent in the first taste that this is a wheaty beer, yet not overpowering with malt flavor. The harmony of grassy hops and warm malt make for a well-balanced and smooth American-style Märzen, a good start for any Oktoberfest shindig.

The Shiner Bock is pretty well known to beer connoisseurs, so I had a good feeling about this one from the start. This pours a brilliant, clear amber color with about an inch and a half of nice, pillowy head. The lacing it leaves behind is quite splendid and makes a lasting impression on the glass. It has a very wheaty aroma, which come from the notes of hearty yeast that are discernible on the first sip. An aftertaste of yeast lingers, which I wasn’t particularly fond of, but the overall taste was decent and light-to-medium bodied. This is a good option for kicking back a few in preparation for Oktoberfest merriment.

My proclivity for Pumpkin Ale’s is neither here nor there, so this was chosen in a close-your-eyes-and-point style: the name and packaging caught my eye. The ale from this stubby bottle pours a dark, cloudy auburn with a modest creamy head that dissolves into a lingering ring. Right off the bat, it hits with intense and comforting smells of warm vanilla and toasty nutmeg. The scent of pumpkin is noticeable but not overbearing. The unrelenting strong spices encompass the exceedingly smooth first taste. An appropriate amount of carbonation kicks up the flavors and add a nice crisp finish. I would highly recommend this warm fall ale, and considering how finicky of a beer drinker I am, that means a lot.

Almost anything from Brooklyn Brewery has been a standby for me and holds a special place in my beer-loving heart. After letting this amber lager settle into the glass, along with the fast-falling off-white head, smells of the traditional German hops and sweet malt permeate throughout. Undertones of yeast linger, which are present in the first mouthful, but not as apparent as in the Shiner Oktoberfest. The carbonation makes for an unfortunately thin taste that makes the lager fall flat pretty soon. Not one of the better Oktoberfest style beers I’ve had, but definitely worth a try.

Another personal standby of mine is the Long Trail Double Bag, so I was curious enough to add their pumpkin ale to my selection. Vermont has always encapsulated an image in my mind that leads me to believe it can do no wrong when it comes to anything. That set a high standard for this ale. Half a finger’s worth of dense, cream-colored foam formed at the top of this cloudy copper libation and notes of pumpkin are barely noticeable. But the scents of cinnamon and clove are alive in this one and hit the nose with each swig. Although the low carbonation level makes for a smooth ride in this brew, I prefer the Roadsmary’s Baby to this.

I saved the most legitimate beer from this lineup for last, judging by the name. Weihenstephaner is the world’s oldest brewery, which is displayed on the bottle. I’m ashamed that it took me this long to acquire one of their beverages, but I am here to tell the tale. It pours a golden straw color, forming a thin yet effervescent head of white foam. There’s a pungent citrus aroma, and also a yeasty scent I’ve grown accustomed to from paler beers. The taste is slightly roasted in flavor, but very crisp with a hint of a bready finish. This was probably my favorite brew out of all of these choices.

There are numerous other types of Oktoberfest, fall and pumpkin beers to try, so be adventurous. Just keep walking by that case of Shipyard Pumpkin, even if you told your friends you would buy it for the party. Disappoint them at first, and then make their night with a brand new brew.

Tracy Troisi can be reached at [email protected]