There is no such thing as ‘reverse racism’ 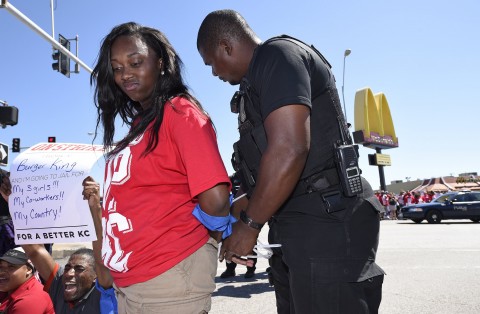 A few weeks ago, my colleagues and I were having a discussion regarding the underrepresentation of students of color in state universities across the United States. I attributed the disparity, in part, to highly segregated public education systems and Supreme Court decisions, which ban race-based college admissions decisions. In response, my colleague (who just so happened to be a white, heterosexual and male-bodied individual) stated that he does not believe in affirmative action programs because it is a form of “…reverse racism, which results in white students being unfairly targeted because of their skin color.”

His life experiences led him to accept concepts such as “post-racism” and “reverse-racism” as truth. That was his truth, but it is certainly not mine.

I am a person who is very particular about language and words. I pride myself on knowing the history and underlying meaning behind words before I use them, especially if those words directed at someone.

“Reverse racism,” just like “post-racial,” is an asinine term for a bankrupt notion. People of color cannot be racist because racism is institutional. Racism is systemic. Racism is normalized. People have to understand that the term racism is an indicator: it identifies a network of structures and institutions (the state, the police, universities, corporations, banks, etc.) used to oppress and marginalize entire populations. Allow me to further illustrate this:

Black people cannot enslave, colonize, marginalize, imperialize nor politically and/or economically disenfranchise white people. We do not have the capacity to enact “white codes” or impede on voting rights of white people because we do not have access to privileges, systems and resources to do so. Racism is not one person blatantly being discriminated against; it is an entire group of people operating within a structure where the idea of racial inferiority is woven into the fabric of the society, so much so that it makes it difficult for a person not to discriminate.

The rise of “reverse-isms” is indicative of the current racial/political climate in the United States in that whenever a person of color or a member of an oppressed group demands resources which will help fulfill their needs as human beings, the automatic assumption is it has to be a zero-sum gain. If we give something to ‘the minorities,’ the majority group will be losing out.

One of my favorite examples of such a mentality is this: It’s unfair that Black students have a Black Student Union when white students do not. To put it simply, the University of Massachusetts is a white Student Union.

The same narrative is true for other “-isms” that exist in our society. If the College of Natural Sciences launches an initiative geared to bring more women/female-bodied individuals into the science, technology, engineering and mathematics fields, it is not reverse sexism. It is merely a method to provide an equitable playing field for those whose lives have been systematically devalued by a society, which places the emphasis on straight, white and Anglo-Saxon males.

Please do not misunderstand: Do some people of color have unsubstantiated beliefs about individuals based on race, ethnicity, religion, sexual orientation or cultural backgrounds? Of course. Is there hate, intolerance, discrimination, stereotyping, bigotry and prejudice found in these communities? Of course. However, racism is not a term that can apply to people of color because we still operate from an oppressed position in this society as compared to white people.

I personally do not believe my colleague is racist. However, one does not have to be racist to benefit from a racist system. This is why when he looks in the mirror, he sees a man. When I look in the mirror, I see a Black man. The same holds true for my female-bodied colleagues, as it is a fact that this society does not let us forget.

Unless one is arguing that people of color are “naturally inferior” to white people (which is an explicitly racist position), there has to be an admission of some mechanism which limits opportunity. That mechanism is racism: the existing social, political and economic rule systems that discriminate against people, either overtly i.e. racial profiling or covertly limiting the Black electorate through redistricting, red-lining, etc.

We admire and revere the individualist who succeeded by pulling themselves by their bootstraps. However, I cannot pull myself up if someone takes my boots away and prevents me from obtaining another pair.

When one blows the “reverse-ism” horn, they succeed in making the issue all about them. They draw attention away from the fact that there are groups of people who are not represented in certain arenas due to persistent historical and institutional barriers.

Josh Odam is Collegian columnist. He can be reached at [email protected]