U2 falls flat on “Songs of Innocence” 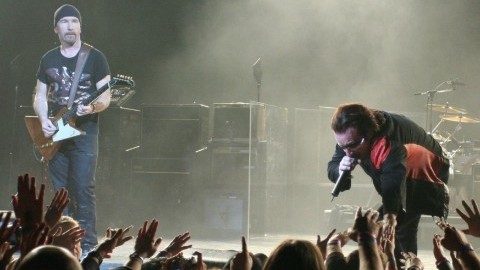 At its best, Irish rock band U2 was characterized by a complete lack of modesty or reservation about what it was doing. The band wanted not only to be the most popular group in the world, but the most important and influential one, as well.

With that said, no other band has a high enough profile to announce the same-day release of a new album alongside a product as high-profile as the iPhone 6. However, U2 did just that on Sept. 9, not only giving away its new album, “Songs of Innocence,” for free, but automatically placing it in the music library of all 500 million iTunes users.

It is pretty safe to say that only a band as universal as U2 would have the gall to attempt such a brazen distribution tactic. But, for all one can say about its extraordinary popularity, there is a reason the quartet reached such a level of cultural ubiquity.

“The Joshua Tree,” the 1987 album that made the band world-famous, was filled with lush, intricate guitar playing from band member The Edge, operatic vocals from Bono and incredible songwriting. Despite its increasing pretentiousness, the band maintained its integrity with equally great, more experimental albums such as “Achtung Baby” and “Zooropa.” Even the no-holds-barred stadium rock of more recent albums like “All That You Can’t Leave Behind” and “How to Dismantle an Atomic Bomb” offered adrenaline-fueling hits like “Beautiful Day,” “Vertigo” and “Crumbs From Your Table.”

“Songs of Innocence” desperately tries to set itself apart from the rest of the band’s discography. If nothing else, it certainly sounds as expensive as it likely was to make. A total of five producers handled this record, including Danger Mouse, Paul Epworth and previous collaborator Flood. And while it certainly is not bland, the album does not have the sonic dynamics or explosive eruptions of emotion that a U2 album needs to be a real success.

While its title is a reference to the band’s formative years in the late 1970s in Dublin, the hungriness of the band’s youth doesn’t really permeate the music as much as the quartet probably wanted it to. Bono writes in the album’s liner notes that “Songs of Innocence” is the “most personal” U2 album ever. And maybe that is the case for him at least, because this is without question the most Bono-centric album the band has ever released. With The Edge and the rhythm section, comprised of Adam Clayton and Larry Mullen, mostly relegated to the sidelines, “Songs of Innocence” is the weakest U2 album in at least 15 years.

Opener “The Miracle (of Joey Ramone)” cuts right to the chase, vaguely detailing the band’s first experience at a Ramones concert. Where Bono could have been unusually detailed and heartfelt, he uses his typically over-the-top lyrical view to make the encounter sound more like some spiritual vision.

“I woke up at the moment when the miracle occurred/Heard a song that made sense of the world,” he croons over some unfortunately fuzzed-out riffing. That fuzz is the first sign of the sad fate The Edge suffers on this record. Regardless of the track, or producer, The Edge’s guitar playing is completely buried in the mix, reducing his contributions to little side statements here and there. Rather than leading the charge as they always have, The Edge, Clayton and Mullen are merely made auxiliary to Bono.

Even songs like “California (There Is No End to Love),” which has something that approaches a soaring chorus, never gets to the height where it needs to be. Ballads like “Song for Someone” are too vague and plodding to match the band’s usually cheesy, but touching slow numbers. Closer “The Troubles” wastes the considerable vocal talents of Lykke Li by stringing out her contributions over another poorly mixed, Bono-centric slow-burner.

“Songs of Innocence,” at its heart, is a batch of contradictions. It features U2 trying to experiment and move away from a strictly stadium rock sound, while simultaneously keeping things mellow enough so that half a billion people can enjoy the album.

Complete with a shoddy production job from Danger Mouse—who was the primary producer, with the other four acting as assistants—U2 fights a valiant battle to echo the relentless emotional drive of its past, while trying to sound like the future. However, the gaping holes that permeate this strategy are far from flattering.