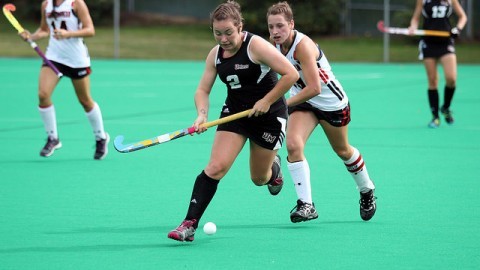 The Massachusetts field hockey team erupted for three goals in the second half to clinch a 4-1 victory over Virginia Commonwealth on the road Sunday afternoon.

Hailey Cockrum scored her first two goals of the season to lead UMass to its first Atlantic 10 win of the year.

Brooke Sabia and Nicole Miller also notched a goal apiece for a Minutewomen (3-7, 1-1 A-10) team that has struggled to consistently score goals this season. UMass outshot the Rams (1-7, 0-2 A-10) 14-7, marking the third straight game which the Minutewomen held the advantage in shots.

“It’s scary, in a good way, the potential this group has to score goals that quickly. We have that potential, but we have not shown it yet,” UMass coach Carla Tagliente said.  “Once this team gets going and gets some momentum, the confidence will go up and hopefully this win will kickstart something for them.”

Cockrum began the scoring in the 16th minute off of a penalty corner from Lauren Allymohamed. The sophomore said that getting the first goal of the game jumpstarted the Minutewomen’s lacking offense.

“She tipped it and I just touched it in,” Cockrum said. “It was our first goal and it really got everyone pumped up and ready to go.”

Cockrum added her second goal with 10 minutes remaining in the second half.

Miller’s score came on a penalty corner from Sabia in the 65th minute. With her goal and assist on Sunday, Sabia earned her 10th point of the season.  Her four goals place her in a three-way tie for seventh in the A-10.

The Minutewomen’s four goals on Sunday marked their largest scoring output of the season.  Cockrum said that this offensive success stemmed from remaining confident.

Minutewomen goalkeeper Sam Carlino had another strong day in net, saving three of the four shots she faced.

Tagliente said that while the Minutewomen played a strong game, there are several areas that need improvement, such as increasing scoring opportunities and limiting defensive mistakes that lead to close shots on goal or penalty corners.

“We just need to look at why that is happening and solve that problem,” Tagliente said.

UMass will host Lock Haven on Friday and Saint Francis on Sunday.