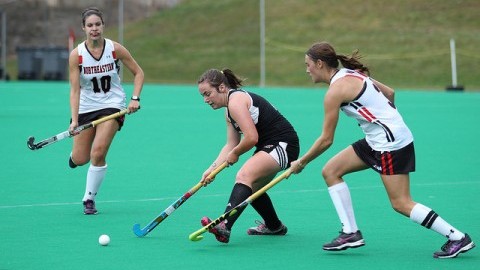 The Massachusetts field hockey suffered another gut-wrenching defeat on Sunday, falling 2-1 to Northeastern on a late goal by Emma Lamison.

Lamison broke a 1-1 tie with five minutes left in the second half with her second unassisted goal of the game. The sophomore forward dribbled down the right side of the field before sliding the ball past Minutewomen goalkeeper Sam Carlino.

UMass (2-6) tried staging a late comeback with possession on the Huskies’ end for the final minutes, but failed to convert on its chances.

“I thought we played some good hockey, again I think we are doing better things and improving in a lot of different areas, we just didn’t finish some opportunities,” Minutewomen coach Carla Tagliente said.

UMass appeared in postion to end the Huskies’ four-game winning streak when it scored the equalizer with 11 minutes left in regulation on senior Lauren Allymohamed’s second goal of the season. The goal came off of a rebound from a Minutewomen penalty corner.

Tagliente added that there is still plenty of room for improvement following the loss.

Despite allowing the game-winning goal, Carlino had a strong day in net, keeping the Huskies scoreless for the entire first half. The junior goalkeeper made six saves for the game and stopped three penalty corners.

“We had a lot of excellent execution today (on penalty corners). We did miss two at the post and another was a scramble on the end line as well as a goal,” Tagliente said.  “Most of the corners today we made dangerous…so that’s good. I’m happy with where the corner execution is moving to.”

The Minutewomen haven’t lost a game by more than two goals so far this season. Tagliente said that her team has remained competitive in every game they have played despite the subpar record to date.

“We are right in the games, that is the first thing. If we are not in the games then we have a lot more work to do than we think,” Tagliente said. “It’s small details. They know it.”

Up next, UMass will begin its conference play and look to defend its Atlantic 10 championship.

“We will see what kind of heart we have going forward,” Tagliente said.  “I think we have a lot left in us.”

The Minutewomen’s A-10 schedule begins on Friday, when they will travel to Richmond for a 4 p.m. matchup.