UMass polo club open to those of all skill types 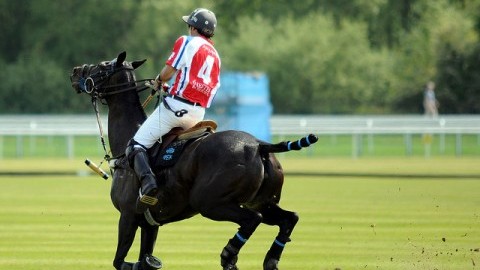 When the average person thinks of polo, they typically think of shirts from Ralph Lauren or another brand name store.

But for the riders of the Massachusetts polo team, polo has a completely different meaning. To them, it’s an intense competition played on horseback, and like many other sports, the objective is to score using a small ball.

Interest in polo is sparse, so players do not typically have to try out. The only requirement to join the team is being able to ride a horse.

“Typically [we] take students who know how to ride but with no polo experience,” coach Hilary Mroz-Blythe said.

After four players graduated last spring, UMass was left with seven returning players with polo experience. But nine new players have since joined the team, bringing the roster to an even 16 players.

“Everyone has been really welcoming. It’s kind of one of the sports that no one has really played before,” sophomore Monica Aguilar said after joining the team this semester. “They really break it down for you.”

The UMass polo team plays a variant of the game called “arena polo.” Each team consists of three riders and their horses. The game is played in a small sand arena, which limits speed and forces players to use maneuvering and short passing plays to score. The ball is not unlike a small soccer ball. Games last about two hours and are divided into periods called “chukkas”.

According senior Natalie Dostoomian, president of the UMass polo team, practice doesn’t start until the horses are ready. Preparing the horses involves brushing them and fitting them with saddles and protective gear. Players choose mallets and set up the balls in the field, but don’t start playing until the horses have been warmed up.

In a typical practice, players will warm up their arms by hitting balls around the arena, then move on to more specific drills. Sometimes, the team will play a chukka or two. Practice takes place at Stony Pony Farm on Tuesdays and Sundays, with additional sessions for new recruits on Mondays and Thursdays.

Uniforms consist of a helmet and face guard, leather boots, knee pads and a team jersey. The protective gear is designed to keep players safe from mallets, horses and balls during the match. Horses are also fitted with protective gear, including boots on their hoofs that wrap their legs. Horses’ manes are shaved off and their tails are tied up to prevent them from getting caught in a passing mallet or the reins of another horse.

The UMass polo team is also committed to giving back. On Sept. 14, it volunteered with the Norfolk Hunt Club for its annual “Polo in the Country” charity game. The team sold raffle tickets and t-shirts and the funds went to the preservation and protection of recreational space in surrounding areas. The event consisted of a match between Norfolk Polo and Dedham
Polo, and also included tailgates, a halftime show and pony rides.

“It was really fun. We got to meet the teammates who had been here a lot longer,” Aguilar said.

The polo team has its first match against Connecticut on Oct. 4.

Lauren McArdle can be reached at [email protected]