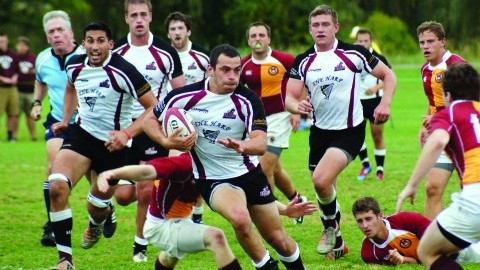 July 5. Chatswood, New South Wales, Australia. 10:30 a.m.
Devin Ibanez is geared up for another day of rugby. His Sydney East squad is set for a Saturday morning matchup against Gordon as the 21-year-old’s summer-long rugby adventure down under continues.
Ibanez plays a solid 40 minutes and Sydney East wins 22-14. But his day is far from over.
Shortly after the game, Ibanez hops on a southbound train, and two hours later arrives in Burraneer for his second game of the day.
The Maccabiah Blues – Ibanez’s other team while in Australia – kicked off at 3 p.m.; Ibanez arrived at the field at 3:05 p.m.
Boots on and mouth guard in, he was subbed into the game by 3:15 p.m. The Blues lost 36-18, but Ibanez was named Man of the Match after playing an entire 80-minute game.
Teammates deemed him crazy for playing that much, but Ibanez couldn’t imagine any other option.
“I’m in Australia to play rugby,” Ibanez said, now a senior captain for the Massachusetts club rugby team. “I’m gonna play as much rugby as I can.”

Ibanez started playing rugby as a sophomore at Brookline High School and said that he’s been in love ever since. He began playing year-round during his junior year.
As a member of the Warriors’ rugby program, Ibanez said he was introduced to the unique brotherhood that is fostered by the sport and is grateful to have been a part of such a strong high school program – one he said is the oldest in New England. Brookline inspired him to continue playing and to strive to be the best player that he can possibly be, according to Ibanez.
During his time with the Warriors, Ibanez said he learned not only about rugby, but also about what it meant to be a leader, as he was the captain for Brookline throughout his senior year. Ibanez was also a co-captain of the Boston U-19 team for three summers.
Surprisingly, Ibanez said he didn’t even know rugby existed before high school, but ever since, his dedication to the sport has exemplified his true passion.
“Honestly, pretty much everything good that’s happened in my life has come out of rugby and I strongly believe that I’m just a rugby maniac,” he said.

When it comes to rugby, Ibanez won’t let anything stand in the way of his progress and appetite for the game. A month and a half before he left for his Australian adventure, he didn’t have a ticket or even a travel visa, but he knew he had to get there. After having already played for UMass for three years, Ibanez was well-acquainted with the drive it takes to excel in this demanding sport.
While in Australia, Ibanez and a fellow friend and rugby player moved into an apartment above a Turkish restaurant where they would spend the summer living at bare minimum, engrossed in the sport and community that the rugby environment had provided for them.
Divvying his time between Sydney East and the Maccabiah Blues, Ibanez said that Sydney East brought a more competitive aspect while the Maccabiah team contributed a more social piece and gave him a sense of family.
Ibanez joined Sydney East midway through its season, but quickly moved through the ranks, further showcasing his drive to evolve his rugby game. Each team is structured into four portions – or subsets of the team – known as grades. First grade is the highest talent level. Starting from fourth grade by default, as all new players do, he then progressed to third, and then to second grade reserve.
Ibanez was also tested by playing in the men’s division, which he had only recently qualified for a few months prior when he turned 21, making him one of the youngest players in the group.
Participating in this advanced group where the majority of players were older, faster and had formerly played professionally was a welcome challenge for Ibanez. He said this endeavor significantly contributed to his mental toughness and composure on and off the field.
In Australia, almost unbelievably, rugby is played at an even more intense level than it is in the United States. Ibanez said that many players are there simply to mess with you, to cheap shot you, play “dirty” and to generally get you off your game.
It was a tough adjustment for him, and at first he struggled to control his emotions during the constant assault. Gradually, however, he said that he got accustomed to the physically and mentally demanding style of play, and said that he’s become a better player because of it.
“Here, nothing anybody does can even come close to getting me because I’ve had to deal with so much worse,” he said.
Ibanez’s psychological resilience wasn’t the only thing that improved while he was abroad. Due to the intense level of play, training and more than double the amount of games played in a UMass season, his strength and skills were greatly enhanced. Ibanez said that returning to Massachusetts while essentially in mid-season fitness positively contributed to his play for the Minutemen this season.

For Ibanez, being captain means much more than just the title. As one of the only players that has held leadership positions on the team for all four years – this is his second year as captain for UMass – Ibanez has a unique perspective on team dynamics and how things have transformed over the past few years.
As a freshman, Ibanez wanted to get involved with rugby leadership immediately. As Match Secretary during his first year with UMass, he was responsible for organizing games and other behind-the-scenes tasks with the purpose of moving the team forward. He was Fundraising Coordinator as a sophomore before moving up to forwards captain junior year, which he said he has always had his eye on.
“I definitely always thought that I would be somebody who could help take this team into a more serious rugby mindset and hopefully have us realize a bit more of our potential, because we’ve definitely fallen short in years past,” he said.
Since being named forwards captain during the second semester of his junior year, Ibanez has embraced his role as leader and thrives on going above and beyond expectations. He “lives and breathes rugby” and loves that everyone expects the best of him because he said he truly expects the best out of himself.
“I think if people see me holding myself to higher standards, then everybody else will follow suit,” he said.
However, Ibanez said that being a captain hasn’t always come naturally to him. Even though he was captain of his high school team and was extremely committed to his role, he said he didn’t really know how to lead. In the past, he said he motivated his teammates by yelling at them, and the way to lead was to be the only leader, though he was one of three Brookline captains.
His experience in Australia and his continued involvement with UMass gave him a “blueprint” for how to be a successful leader and be a better captain in general, he said.
Ibanez, affectionately known as “Squid” by his teammates, has become the backbone of the Minutemen. He consistently generates positivity and motivation among his teammates, who Ibanez said have made being a leader very easy for him. He labeled Alphonsus Prezza and Tim Porter, among others, as players who have contributed to team leadership.
“I really want us to be a team of leaders,” Ibanez said. “A team that speaks out during practice, leads on game day and are people who really live and die for the team.”
Team president Jonathan Rossini said Ibanez’s “rugby IQ” and presence on and off the field have made him an extremely valuable player.
“(Ibanez’s) life is truly all about rugby,” Rossini said. “We are very lucky to have someone leading us into battle every weekend that cares so much about the game and all of his teammates.”
Said Ibanez: “I feel like people who know me through rugby know the best version of myself, they know the part of me that’s a leader, they know the part of me that’s vocal and passionate and wants to succeed.”
UMass coach Phil Ciccarelli said players respect Ibanez both for his athletic ability and his rugby intellect. Ciccarelli also called Ibanez a student of the game, playing with heart and intensity, quickly reacting to situations and making positive decisions.
Working so closely with Ciccarelli and other players, Ibanez said, has made him more receptive to criticism and better at working with and respecting the opinions of others.
Ibanez’s co-captain and backs leader Prezza said he and Ibanez work so well together because of their mutual confidence in one another. They’re both experienced players who have grown to trust each other and their judgment on what’s best for the team.
When Ibanez is not totally focused on rugby, he spends his spare time volunteering for Amherst public schools as a mentor and tutor for struggling students. Both of his parents were teachers, and as a sports management major with an education minor, he has always been interested in this type of work.
Although his career at UMass is coming to a close, Ibanez said that this is just where the program is beginning to take off. He believes that being a great captain means focusing on the future impact you can make on the team.
“Being a captain isn’t a one year thing, it’s for life. You’re always going to want to see how the team progresses,” Ibanez said. “Your success as a captain isn’t really measured by the year you were there, it’s how you do the year after, and the year after that and the base you set up for the team to succeed in the future.”

Though Ibanez is not sure of where his path will take him after he leaves UMass, he knows that rugby will undoubtedly be the nucleus.
He has toyed with the idea of returning to Australia for a year and getting more involved in a country where the sport is fully developed at multiple levels. In Australia, rugby is an immense part of the culture and it’s a lifestyle that Ibanez admires highly.
Ibanez, however, has also contemplated traveling to Argentina, where he said is home to the best amateur rugby league in the world. In Argentina, he could use his sport management skills to spread the sport he loves throughout the nation while also learning Spanish and honing his own talents.
Though Ibanez would like to stay in the U.S., he also wants to follow rugby for his whole life, wherever it may take him. However, most opportunities in this sport are out of the county.

Ariel Kallenbach can be reached at [email protected]