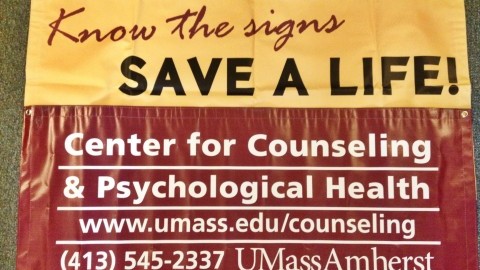 In recognition of National Suicide Prevention Week, which starts Monday, the University of Massachusetts’ Center for Counseling and Psychological Health is holding a campaign all this week to promote awareness on campus.

Elle Berch-Heyman, coordinator of community outreach for CCPH, is overseeing the campaign while collaborating with other CCPH staff members and on-campus organizations.

According to the Suicide Prevention Resource Center, suicide is the second-leading cause of death among young adults aged 18-24. At UMass, the campaign organized through CCPH focuses on increasing awareness of this prevalent issue.

Heyman said the intention of this campaign is to “spread awareness paired with the resources both on and off campus to help people recover and get better.”

“I hope that conversations continue to happen and that people know that recovery is possible and learn that people are in recovery around acute mental health symptoms and are doing really well,” she added.

Heyman expressed gratitude for being able to work with UMass programs such as Active Minds and collaborate with WMUA 91.1 FM on recording public service announcements for the campaign, which will continue throughout the year.

Although there were a few obstacles in the planning of this campaign, Heyman said she has received positive feedback.

“There are challenges in organizing when there’s just so much bombardment of information,” she said. “I was a little worried if I could collaborate with everyone at this big start and the response has been really nice.”

One portion of the campaign involves a suicide prevention panel organized by Active Minds, which will take place on Sept. 18 at 7 p.m. in the Campus Center.

“There will be representatives around the community of resources as well as speakers that will talk about how to cope, recognize signs and what to do to help prevent suicide,” Heyman said.

The staff of CCPH will participate in the recent “Doubtfire Face for Suicide Prevention” campaign found on Facebook on Thursday, in which individuals share videos of themselves shoving a pie in their face in recognition of the recent suicide of Robin Williams.

With “Say ‘Hello!’ to Suicide Prevention” as its slogan, the cause hopes to pay tribute to the life and work of Robin Williams while also spreading awareness of suicide prevention.

Along with increasing awareness of suicide prevention, de-stigmatizing mental illness is an important aspect in understanding the issue.

“One of the things that I really liked about the opportunity to come work here is last year some of the work that was done was on de-stigmatizing mental illness and I found that really powerful and inspiring,” Heyman said.

From a grant provided in 2006 by the Substance Abuse and Mental Health Services Administration, an agency within the U.S. Department of Health and Human Services, CCPH received federal funding to spread suicide prevention awareness. Because this work with suicide prevention was so extensive and successful, CCPH received a second three-year SAMHSA grant to expand these efforts in 2009. The grant program included awareness campaigns, residential life training and UMass community training.

Some of the work for this issue included a campaign for National Suicide Awareness Month and National Survivors of Suicide Day in November 2010 and 2011, all supported through the SAMHSA grant program.

Once the second grant ended, CCPH decided to carry on the work, with Heyman leading these efforts.

“The work was so well-received that CCPH and UMass decided to fully fund my position,” Heyman said.

Half of Heyman’s work focuses on community outreach and gatekeeper training, also known as suicide prevention training. This training can be done for anyone on campus including faculty, different departments and residential life and not only focuses on suicide prevention but mental health as well.

“Any department can request specific training,” she said. As a “point person” for this job, Heyman then does the training herself or has another representative from CCPH provide the support training to make these initiatives happen.

Having this job, Heyman also understands the risk.

But, she says there is also a reward for her work.

Julia McLaughlin can be reached at [email protected]