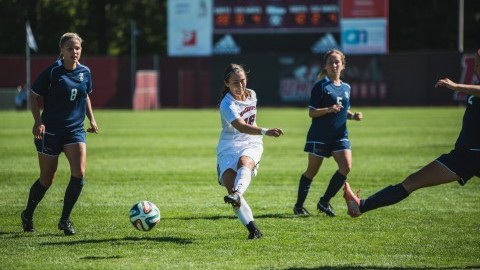 It was a second half to forget for the Massachusetts women’s soccer team on Sunday, as the Minutewomen allowed four goals after the halftime break en route to a 5-0 loss to Connecticut.
The shot totals – 15-9 in favor of UConn – were fairly even between the two sides. But the Huskies proved to be more optimistic.

Danielle Gottwik scored the first goal of the match in the 37th minute, but the Minutewomen’s defensive line held strong until halftime and – with a few missed scoring chances behind them – UMass was seemingly within reach.

“We were tremendously confident after Northeastern,” UMass coach Ed Matz said, referring to the team’s 0-0 tie with Northeastern on Friday. “We had the better chances in the first half, but their keeper made some great saves. …We were very confident going into the second half.”

This confidence was not enough for the Minutewomen to overcome their scoring woes, however, as they failed to find the back of the net for the second straight match. Meanwhile, UConn’s forwards took control of the match in the second half.

Rachel Hill scored her ninth goal of the season for the Huskies in the 56th minute for the second score of the game. Then the floodgates came open.
Gottwik scored her second goal of the match in the 71st minute with a long strike from the top of the box. Eight minutes later, Riley Houle scored a sliding goal to extend the lead, only to follow it up with another goal in the 88th minute.

Despite the empty result, UMass was relatively productive in generating scoring chances throughout the match. The Minutewomen continued to win the majority of corner kicks – they have earned 51, while allowing only 35 so far this season – but once again failed to turn their set pieces into goals.
“The game was fairly even on shots and saves,” Matz said. “The score wasn’t indicative as to how this game was played. … They just have some natural goal scorers. When we gave them room and time they capitalized. We had those opportunities too.”

UMass is now halfway through its biggest road trip of the season. The Minutewomen will continue to look for their first goal of the trip when they take on Brown in Providence, Rhode Island, on Thursday.
“There’s a lot we can take from today,” Matz said. “We just need to go back and make sure that this is a productive loss. We move on and we learn from it.”