US and allies must eliminate ISIS 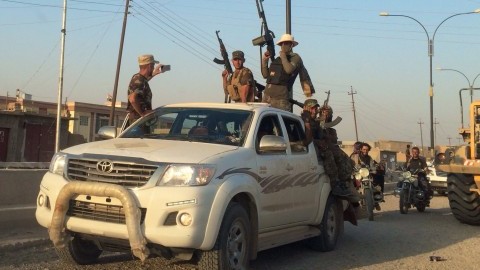 Two weeks ago, the militant group ISIS (also known as ISIL or Islamic State) posted a video online in which they showed the beheading of American journalist, New Hampshire native and University of Massachusetts alumnus James Foley, who had been held captive since 2012.

ISIS is a militant Islamic movement that has gained ground in both Iraq and Syria and aims to establish a base for their Islamic caliphate, in which those under their power will live under Sharia Law. Their goal is, ultimately, world domination.

Far from a secular army with territorial or economic goals, the Islamic State is rooted in religious fundamentalism. Even the terrorist group Al-Qaeda has classified their actions as too extreme.Tactics used by ISIS include broadcasted mass executions of enemy soldiers, the selling of women as sex slaves and genocide of Christians and the Yazidi people, an ethnic minority in Iraq.

Moreover, ISIS has threatened to “drown the US in blood” and have claimed that they will raise their flag on the White House. The beheading of Foley came in response to the limited United States airstrikes used to assist Iraqi and Peshmerga troops fighting the militants. At the end of the video, ISIS showed another man, purported to be American journalist Steve Sotloff and threatened to kill him if the U.S. does not end the military airstrikes in Iraq.

Given the delicate situation generated by over a decade of American troops in Iraq, what should America do?

The answer is simple: eliminate the threat. This is not the same case in Iraq as it was 10 years ago, in which the credibility of a true threat to the United States is questionable. This isn’t Al-Qaeda, an enemy with no physical base that is hard to pin down. This is a clear cut case of an American enemy –a global enemy –that wants to destroy all of those who are different from them, and the longer we wait, the stronger they will grow.

ISIS has killed an American citizen. They have made their ambitions to attack the US clear. They have repeatedly committed crimes against humanity by indiscriminately slaughtering innocent people. Absolutely nothing is to be gained by allowing them to continue their unchecked offensive of violence, hate and intolerance.

The human rights abuses committed by the militant group alone are enough to warrant military action, not to mention the killing of an American citizen. I’m not a proponent of war, and, given the outcomes of both the wars in Iraq and Afghanistan, I know most Americans are not, either.

With that said, I am a proponent of security, I am a proponent of human rights and I believe that it is the position of the United States, and all other countries that are capable of doing so, to step in and put an end to the violent fanaticism that is running rampant in Iraq.

We need to do it for Foley. We need to do it for the Christian and Yazidi people who were slaughtered simply because they were different. Intolerance has no place in the 21st century, especially intolerance that results in genocide. Eliminating ISIS by whatever means necessary would both rescue people helpless to defend themselves and remove a group that will undoubtedly be a threat to the United States in years to come.

The U.S. response needs to be swift and ruthless. In the past decade or so, tactics such as airstrikes and arming and training our allies have proven to be popular alternatives to traditional measures. Both of these, however, have done little to quell the momentum of ISIS.

Both the Iraq War and Vietnam War have been classified by some as mistakes: wars that did not need to be fought that only resulted in the loss of American lives. But the nature and ambitions of ISIS are far different from those of Saddam Hussein and Ho Chi Minh. Their ambitions are much closer to those of Nazi Germany: rooted in violence, intolerance and extermination.

Steven Gillard is a Collegian columnist. He can be reached at [email protected]