A haunting at UMass 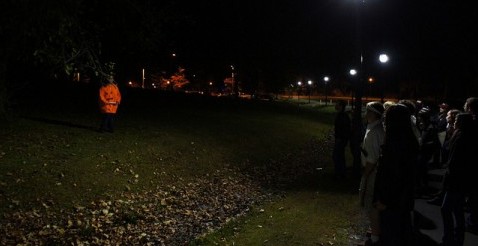 At 150 years old, the University of Massachusetts is bound to have some ghost stories. On Monday night the UMass History Club hosted a ghost tour of the campus, highlighting haunted dorms and buildings and sharing the history behind the alleged hauntings. While no paranormal activity occurred during the tour, the club made sure to keep the ghostly spirit alive.

Sara Downard led the tour that began in Herter Hall and wound throughout the campus, up through the Northeast Residential Area and the Orchard Hill Residential Area, and down to the Central Residential Area. Before the tour, Downard addressed the reality of the hauntings at UMass.

“It depends on your perspective,” she said. “Have people died here? Yes. But to hear the rest of it you will have to wait and see.”

First stop on the tour was the Old Chapel. Built in 1885, the chapel is now structurally condemned but is pending renovations and was recently nominated to the National Register of Historic Places. Legend has it that in 1929 the bell ringer, on his way to the chapel to perform his daily duties, was struck and killed by a car. Ever since then, reports of strange noises from the South bell tower have been reported by the few that still enter the chapel.

“It turns out one cook got so mad that he stabbed the other cook to death, and he died,” Downard said.

One of the most peculiar ghosts of UMass is not a ghost at all, but the tale of an odor said to fill the halls of Mary Lyon Hall in the Northeast Residential Area. In 1970, a freshman hung herself in her dorm and was not found for several days. The scent of her dead body filled the hall and students have reported smelling a mysterious odor in the dorm since the death.

The pathway between Orchard Hill and the Sylvan Residential Area is also home to a ghost. In 1929, John B. Howard, the Massachusetts Daily Collegian’s editor, was climbing an apple tree, fell and hit his head. At first he stood up, blinded but unharmed, but dropped dead seconds later. It is said he still walks the pathway to this day.

The tour ended at the most haunted spot on campus, the Stockbridge House. Built in 1728 by Samuel Boltwood, the house has been a host to mysterious noises and ghostly activity to this day. Downard explained that when Boltwood died, Abigail, his daughter, married a British loyalist named John Field who was the richest man in Amherst. At the peak of the American Revolution, John, Abigail and seven other loyalists were locked in the house by revolutionaries, imprisoned, and forced to give up everything they owned. The couple died desolate and poor and are said to still haunt the Stockbridge House.

The UMass History Club has been conducting the free haunted tour for seven years. The original research into the haunted history of UMass was conducted in 2003 by the former club president Kathleen Flynn and former member Patrick Browne. In 2008, Brendan Conway updated the school’s haunted history before the annual tour began.