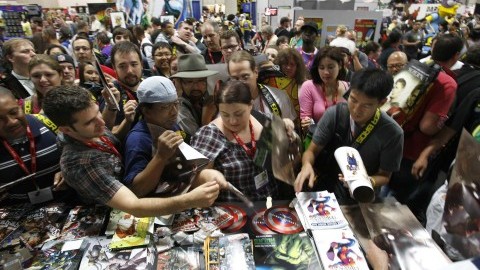 Coming after the horrific aftermath of Marvel’s last tie-in series, “Original Sin,” many readers hoped “Avengers & X-Men: Axis” would redeem the company’s reputation. With a nine-part main series, 10 tie-ins to ongoing titles and the introduction of three series specific to this event, “Axis” had the potential to be a Marvel phenomenon that would set the company apart from other major comic producers. Unfortunately, it tries to juggle too many characters and forgets to focus attention on a strong story line.

“Axis” is built off of a strong premise promising a unique team-up of the X-Men and the Avengers in order to combat an overpowered enemy. Straight out of Captain America’s World War II endeavors, the Red Skull takes the stage as the main villain. But there’s an interesting twist: Red Skull has acquired the telepathic powers of Charles Xavier, morphing him into the unstoppable force, Onslaught. In order to defeat this omnipotent foe, an enormous number of superheroes, anti-heroes, vigilantes and villains are thrown into the fray.

Rick Remender, the writer of “Axis,” was given the daunting task of introducing each of these characters in a very limited number of issues. Through the first three issues, which comprise the first chapter of the series, Remender attempts to establish a plot line in addition to integrating 30 new characters into the event. “Axis” issues one through three fail to properly introduce the main characters and witnesses many of them falling into stereotypical cameos instead of properly developing throughout the story. The plot also falls short as it appears the comic can’t seem to take itself seriously.

Remender’s attempts at humor undercut the dramatic tension struck between the heroes and Onslaught. Thus far, Axis has adopted an emotionless story with no reason to attract collectors to continue reading. The flat story line is especially disappointing as the reader can clearly see the potential of the event. Within reach is an amazing story worthy of being Marvel’s “big event.” Readers can only hope Remender will improve his story over the next few issues.

The weaknesses of the series are not limited to character development and plot failures. The typically talented Joe Kubert doesn’t impress the audience with his artwork in the first two issues. With a premise of such magnitude an artist needs to provide visuals of an equal magnitude. Kubert’s artwork varies from decent to simply sloppy on a panel-to-panel basis. With no true consistency of artistic merit, his talent is not clearly shown and the event suffers dearly for it.

With all of these downfalls in the main series, “Axis” is still able to promise readers that Marvel’s “big event” is not a total failure. So far, the crossover titles have garnered incredible reviews. The ongoing series of Uncanny Avengers, Magneto, Loki and Deadpool have used the main plot of “Axis” within their titles. Weaving the plot into the comics seamlessly, the respective writers of the other Marvel titles have helped to redeem the downward spiraling event. Unfortunately, in order to understand the plots of the crossover titles, it is necessary to drudge through the main story arc of “Axis.”

In a fortunate turn of events, Axis’ minor story arcs have also served to slightly redeem its shortcomings. “Axis: Hobgoblin” introduced readers to a completely new take on a villain that could have only been accomplished as part of the Axis event. Hopefully this trend continues with the other two minor story arcs: “Axis: Carnage” and “Axis: Revolutions.”

Overall, “Avengers” and “X-Men: Axis” does nothing to distinguish itself from Marvel’s other failing attempts at crossover series. Instead, “Axis” plays into the event fatigue recorded by many comic enthusiasts. The first chapter of “Axis” spends too long attempting to set up a story with the proper amount of characters that the reader quickly grows bored with the lack of plot development. The plot falls as flat as the artwork itself, which fails to redeem the title in any manner. The only positive aspects of this event lie in the crossover titles and the minor story arcs. Marvel’s “big event” falls short of its goal due to poor writing and visuals provided by two of the most talented minds in the comic industry.