Cyr: The debate between Tom Brady and Peyton Manning is one that sports fans will never get tired of hearing 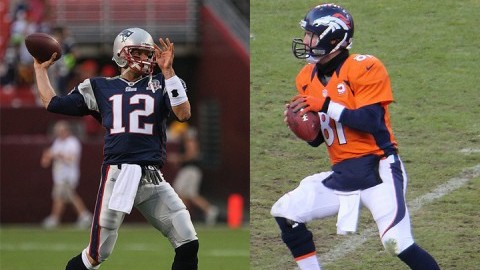 Just like prize-fight boxing matchups used to be, we’ve seen 15 rounds of Tom Brady and Peyton Manning exchanging blows over the last 15 years that will make even the slightest football fan jump out of his or her seat.

We are lucky enough to see a 16th round this Sunday.

On Monday morning, there was a front-page column in the news section of the Boston Herald regarding how the Brady vs. Manning debate over which quarterback is better is no longer relevant.

Sure, now that we are onto Brady vs. Manning XVI, almost every little detail between the quarterbacks has been hammered over and over again, but who cares?

The argument may be old news, but it’s a sports story that will never get old. Every year it’s always the biggest game of the regular season. It’s always the big storyline on ESPN throughout the week leading up to the game. It’s part of the reason why guys like Skip Bayless and Stephen A. Smith and Mike Felger and Tony Massarotti have their jobs.

No matter how red in the face you get or how much yelling and swearing you do defending one of the two, Brady vs. Manning is a sports debate that never gets old.

It’s a matchup between the two best quarterbacks of this generation—both are still looming in the shadows of Joe Montana – and we’ve had the pleasure of watching the two go toe-to-toe for 15 times now in their decorated careers. If you’re a true diehard football fan, these kinds of rivalries never get old.

Call me a youngster, but did people in Boston ever get tired of the Larry Bird-Magic Johnson rivalry during the 1980s? Isn’t this almost the exact same thing?

In a sport that is so team-oriented, where it is a sin for players – especially the way Bill Belichick programs his own – to put themselves above the team, this matchup was always about the two signal callers.

It was never a debate over the Patriots vs. Colts, Patriots vs. Broncos or even Manning vs. Belichick’s defense. The main story was always headlined Tom Brady vs. Peyton Manning.

By now, everyone knows the numbers. Brady owns the head-to-head matchup against Manning 10-5. Manning now sits atop the NFL hierarchy, passing Brett Favre for most touchdown passes of all time. Manning even shattered the record books this past regular season, scoring the most points and throwing for the most touchdown passes in a single season (55). Not to mention, he did this after a series of neck surgeries that could have jeopardized his career.

Each respected supporting cast? Manning holds the advantage in a landslide.

Going back to his days in Indianapolis with Marvin Harrison, Reggie Wayne, Dallas Clark and Edgerrin James, Manning has always had a strong supporting cast around him. Even in Denver with Demaryius and Julis Thomas, Wes Welker – Brady’s old safety blanket – and now Emmanuel Sanders, star talent always seems to follow in the footsteps of Manning.

Brady always seems to do more with less. With the exception of Randy Moss and Rob Gronkowski, Brady has never had laundry list of some of the best players at their respected position around the league. He’s done it in Belichick’s factory of misfit toys.

No matter what argument you make defending a quarterback, there’s one number that New Englanders will always take to the grave when it comes to defending their lord and savior: Brady’s three Super Bowl victories to Manning’s one.

Peyton Manning is the best statistical quarterback in NFL history and probably the best passer and in-game manager there ever will be. But for Patriots fans, those three rings will forever surpass anything that Manning will do in his career.

No matter what side of argument you fall on, Brady vs. Manning will never get old for true sports fans. It’s like George R.R. Martin’s Game of Thrones books: you know the end is near but you never want the story to end. It’s that good.

I don’t think the term “better” will ever be used to settle this debate.

But with the game on the line, I’m taking Brady every time.

Andrew Cyr can be reached at [email protected], and followed on Twitter at Andrew_Cyr.