Dennis Kravchenko at home as a new member of UMass hockey 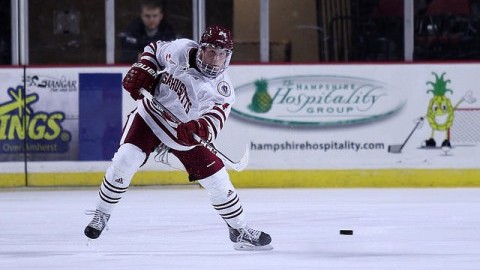 When current Massachusetts hockey coaches John Micheletto and Joey Gasparini left as assistants at the University of Vermont in 2012 to coach in Amherst, Dennis Kravchenko – who was then committed to the Catamounts – had one thing on his mind: he wanted to join them.

Following the two coaches’ departure, Kravchenko said that he never built a great relationship with Vermont’s current coaching staff, leading him to look elsewhere for an opportunity to play Division I hockey.

“When I came to visit UMass everything came hand-in-hand,” Kravchenko said. “The school was great, the campus was great and I had a couple guys on the team that I knew so that relationship really grew.”

A California native, Kravchenko moved to Cedar Rapids, Iowa, where he graduated from high school as a three-sport athlete in soccer, lacrosse and hockey. Because playing collegiate hockey was always his main goal, Kravchenko put the other two sports behind him.

Prior to his arrival at UMass, he participated in many leagues and competitions, playing with some of the most elite prospects in hockey throughout the world. For Kravchenko, playing in the United States Hockey League was a great experience that served as great preparation for playing in a conference of Hockey East’s caliber.

“The USHL is a quick, fast-paced league. Everything is a step quicker than other junior leagues,” Kravchenko said. “It was hard to get used to in the beginning, but after a while you get used to making quicker decisions.

“There’s a lot of high talent there, a lot of the kids who play in the USHL end up coming into D-1 and playing either in the Hockey East, WCHA or other leagues.”

In three seasons, two of which came with the Sioux Falls Stampede, Kravchenko finished with a total of 129 points, 86 of which came from assists. In his final campaign with the Stampede, he played alongside Keith Burchett, who is also a freshman for the Minutemen.

On the ice, Kravchenko has a tremendous sense for the game and knows which attributes he can use to his advantage against the opposition.

“I feel like I’m a quick guy, I see the ice pretty well and I’ll be physical when I need to be,” he said. “As a center I try and back up all my players and do whatever job I need to do. Becoming more of an overall player is really what I’m striving for.”

Kravchenko added another accomplishment to what was an already impressive resume in the fall of 2013, when he won the gold medal as the captain of Team USA at the World Junior A Championships in Nova Scotia.

In the four games he played, he recorded four points, scoring one goal and tallying three assists.

Representing his country on such a big stage at that level was something he said he will never forget, especially since he had the letter “C” embroidered on his chest.

“That was honestly awesome,” Kravchenko said. “I got nominated by the teammates and the coaching staff to be the captain. I was one of the older guys on the team and we had tons of players all over the team that had so much skill that literally put me in the background.

“I just did my part and tried to be an older guy with experience and help out as much as I could. It was a great experience and never thought I’d participate in anything like it.”

Before playing in the USHL, Kravchenko attended Kimball Union Academy in New Hampshire from 2009-2011, where he played with current teammate and senior goaltender Steve Mastalerz. The team was also coached by Ryan Miller, who is a current assistant coach at UMass.

Kravchenko said that being able to reunite with his ex-teammate and coach has made for a comfortable transition and was something he looked forward to since committing to the program.

“It’s awesome. We had a great relationship when we were back in school,” Kravchenko said. “Having all three coaches really on my side here to help me out really made my decision so much easier.

“They know how to handle me and they know my ups and downs, so from there things moved a lot smoother.”

Miller, who is beginning his second season coaching under Micheletto, said he vividly remembers when the Minutemen recruited Kravchenko and could tell right away that he had elite hockey skills.

“Operating on a special level was the first thing that stood out to me when I saw him,” Miller said. “He’s got a really good stick, makes a lot of plays, and is a very good athlete.”

Since their days together at KUA, Miller said he noticed a lot of growth in Kravchenko’s play on the ice.

“When I had him at KUA he was somewhere around 15 or 16 years old and his play around the puck needed a lot of maturity,” Miller said. “So it’s great that he was able to go out to junior hockey and play a lot of games at a high level. With a puck on his stick he was good back then and is pretty good now.”

Miller later added that a player like Kravchenko brings outstanding playmaking abilities, which is an attribute the coaching staff looks for in players that could fit in a fast system.

As for Mastalerz, he said he believes the freshman will adjust well to the Minutemen’s style of play and will bring a much needed energy boost to the team.
“He’s obviously adjusted to each level he’s been a part of, and I’m sure he’ll do the same here,” Mastalerz said. “He’s a good two-way player.”

Like his teammate Frank Vatrano, Kravchenko will be called upon to carry the offense with the departures of Conor Sheary, Michael Pereira and Branden Gracel – last year’s top three scorers for UMass.

“We lost a lot last year, but also gained a lot too,” Mastalerz said. “Every year the new guys have to step up and whether it’s (Kravchenko) or another guy, we have a lot of good skill which could help us in the long run.”

Kravchenko displayed his offensive abilities on Saturday when he scored two goals in a 5-2 exhibition victory over Dalhousie. The forward played on the first line with Vatrano and senior captain Troy Power.

Even though the game didn’t count record-wise, he said it still was nice finding the score sheet in his first appearance for the Minutemen.

“It was an exhibition, but it felt great getting the first one out of the way, it was a weight off my shoulders,” Kravchenko said. “Getting that pass from (Power) made it even easier for me; I told him I owed him a steak dinner after that one.

“It made me relax a little more and overall it was just a great feeling.”

With the regular season set to begin this Friday night against Boston University, Kravchenko said he will do whatever it takes to help the team.

“I’m gonna try and do my best as an individual to do everything I can to help us out,” he said. “Anything I can do to help the team out, whether it means going to the gym an extra day or staying on the ice for an extra 30 minutes, I’m willing to do it.”