Drunk driving ends in crash with passengers sent to the hospital 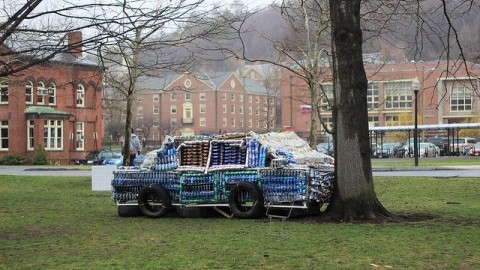 9:25 a.m.: A male wearing a red leather jacket, resembling Keith Richards, was removed from Amherst Coffee on Amity Street. He was harassing women and passing them notes, generally making them uncomfortable. He later trespassed into the store.

9:55 a.m.: An aggressive brown bulldog was loose on Grantwood Drive. It will be monitored closely by its owners in the future.

2:45 p.m.: A box of coffee mugs was returned to its owner at the Lederle Research Tower at the University of Massachusetts on North Pleasant Street.

10:55 p.m.: A female thought someone threw a glass at her door and then took off running. A search was conducted with negative findings.

11:50 p.m.: There was a disturbance at the Townhouse Apartments on Meadow Street. A male pushed someone and got into his or her face. Neither party wanted anything pursued. When spoken to, the male said he had pushed to get the crowd to move.

12:10 a.m.: A gray 2003 Toyota Runner was stopped on College Street. It had a significant amount of marijuana in it. There were no charges and the marijuana was confiscated. It remains under investigation.

12:30 a.m.: There was an assault on West Street. A female was hit in the head with a bottle during an altercation. It remains under investigation.

1:08 a.m.: Individuals were found removing and carrying away traffic cones on North Pleasant Street near the Hillel House. They were ordered to return the cones.

2:56 a.m.: A male was pulled off of his bicycle and then kicked in the head on North Pleasant Street. The incident is still under investigation. The victim was discharged from Cooley Dickinson Hospital with a bandaged head and an arm in a sling.

4:01 p.m.: There was a reported fraud at Sigma Delta Tau on North Pleasant Street. A check was cashed, and the female that sent the check was not aware that the money was being sent to France.

4:04 p.m.: There was a larceny on Lincoln Avenue. The victim reported that mail has gone missing or has not been delivered. The victim is missing red and white Adidas cleats, a $600 rent check and a $25 Subway card. The victim has spoken with the post office.

5:23 p.m.: Robert Auffinger, 35, of Amherst, was arrested for disorderly conduct on Main Street after causing a disturbance.

12:33 a.m.: Anthony Alicea, 20, of Dedham, was arrested on North Pleasant Street for possession of liquor under the age of 21, OUI liquor and negligent operation of a motor vehicle to endanger. He was driving a green 2001 Mitsubishi Galant. The officer started to follow the vehicle after the passenger yelled profanities out the window at the police and at women on the street.

1:27 a.m.: Sean Foster, 22, of Bolton, was arrested on North East Street for OUI liquor and serious injury, negligent operation of a motor vehicle to endanger, a marked lanes violation and a speeding violation special regulation. There were passengers in the car besides Foster, who hit a pole and then a tree. Passengers were taken to the hospital.

10:34 a.m.: There was an animal complaint on Columbia Drive. A hawk flew into the window and was injured outside of the window.

12:43 p.m.: There was a report of a past breaking and entering on South Prospect Street. Entry was made through three windows. Items inside the residence were tossed around, four screens were damaged and there was shaving cream smeared on the walls. Nothing appeared missing.

1:12 a.m.: There was a suspicious person at Penza Family Trust on Gray Street. Someone reported that there was a person running through his or her backyard. Upon a search, nothing was found.