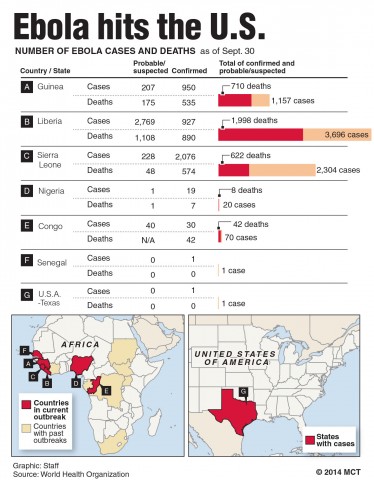 The facts about the current Ebola epidemic in West Africa paint a very clear picture. With more than 4,555 confirmed dead, the outbreak is unprecedented – it threatens all and has crippled many of the affected nations.

The World Health Organization (WHO) reported that in two months, West Africa could face 10,000 cases a week, 70 percent of which are likely to be deadly. While the WHO aims to contain 70 percent of the outbreak and thus reverse its momentum, it is unclear whether this will be effective.

This is especially true in light of recent failures in Spain and the United States of hospitals and health care workers to follow protocol for containing the virus. The circumstances of the outbreak seem to spell certain doom for entire generations of West Africans.

The facts presented by media outlets such as CNN, ABC, NPR, Fox News and the New York Times are highly selective and fail to paint an accurate picture of the crisis. These outlets provide a close look at the death of Thomas Eric Duncan, the first man to die of Ebola on U.S. soil, as they should. They also highlight flaws in the Center for Disease Control and Prevention’s protocol, which should provide useful insights into avoiding the disease in day-to-day life. Instead, those flaws have led to the monitoring of several individuals for the virus.

However, the first Ebola death in the U.S. permanently shifted media focus to the home front. The economic and humanitarian implications of the outbreak have been buried in non-newsworthy stories about infection at home. As the intervals between articles get smaller and the information within them becomes more and more trivial, the topic becomes trivialized, as well. As a result, Ebola has become a boogeyman that nobody takes seriously.

At UMass, Ebola is mentioned jokingly, if it’s mentioned at all. If someone is really sick, they have Ebola. Ultimately, it makes sense that a disease which has such a small presence in our lives isn’t given much attention. But it may be wise to watch closely, given the circumstances.

While the disease may hardly penetrate the U.S., it could become something much worse than a virus. The death toll in the affected countries cannot rise forever without the state failing. If the infrastructures of these countries do not hold, the collapse will open yet another fountain of instability. Failed states in West Africa could create a highly unstable and unpredictable situation, which may not even be salvageable. This is to say nothing of the existing damage to infrastructure in Liberia, Guinea and Sierra Leone.

Increasingly, sensationalist media in the U.S. is causing this problem to be marginalized by the very apathy it creates in its readers. By repeating the same story in different ways and leaving out details which provide a complete context, media outlets desensitize readers to the topic itself.

Cable networks constantly trying to scare their audiences into thinking Ebola will strike their homes make the disease seem like a monster out of a story instead of a relevant humanitarian crisis. Once-reliable sources like the New York Times are happy to do the same for their ficklest and largest audience – the Internet.

People who are apathetic to the entire media system turn to comedians like Steven Colbert and Jon Stewart, who provide incomplete and often misinformed news for the sake of a punchline. While the facts about Ebola and other major crises are available online, the outlets which interpret and report those facts are doing so for the sake of entertainment or comedy.

In the information age, it doesn’t look like it’s enough to read the news if you want to be informed. While it is fairly difficult for the average citizen to have an effect on the Ebola epidemic in West Africa, it behooves us all to be informed about crises of this magnitude.

The U.S. is involved in the affairs of countries around the world, and the lives of the people in those countries are directly affected by the actions of those we vote into office. Media outlets are numerous and overwhelming online, and make it difficult to find the true nature of global crises.